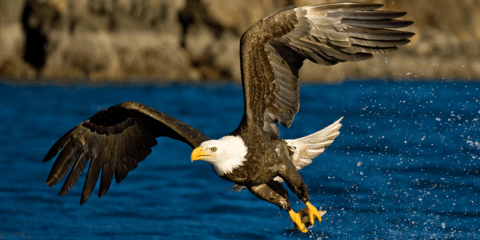 Hi!
I like your connections of America to eagles. I do often relate to being an American to eagles as a joke. “She takes a plane. That flies. Just like an eagle,” I liked this connection because I would have never thought of it. America is such a weird country, the connection to eagles makes a lot of sense. Maybe extend it with more sources but I like it a lot so far. It’s hard to find sources for this so I commend you for finding one 🙂

This was quite a compelling article on the comparison between the US and eagles. It seems that people have lost their sense of nationalism and that pride is just what that eagle represents. Your analogies fit this post perfectly. Here is a source that talks about why the eagle is such a powerful bird:
http://www.pure-spirit.com/more-animal-symbolism/629-eagle-symbolism

Nathaniel,
I thoroughly enjoyed reading you article “American Means Eagles”. You have a gripping style of writing, that entices readers to continue on till the end. I especially like how you used the description of an Eagle as a parallel to the hard work and the initiative of the American people. Here is a historical account of how the Eagle became the symbol of America that you might find interesting. https://www.history.com/news/how-did-the-bald-eagle-become-americas-national-bird

Nathaniel,
Your take on eagles and how they relate to freedom was a very interesting one. I do agree that eagles are a symbol for freedom in America but inferring what people think based on what they say is not a very good way to support your evidence. Here’s an article that can back up your claim of how an eagles are a symbol of freedom with more substantial evidence (Celebrating America’s Freedom). It talks about the eagle appearing on the American flag as well as on billions of one dollar bills making it a very important symbol for America. I hope you find this article helpful and I hope to read more of your work.