American is Not a Language

Home American is Not a Language 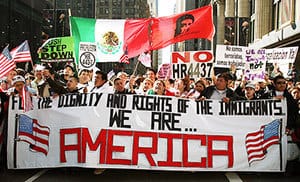 A few weeks ago at high school in Cliffside, New Jersey, a substitute teacher got frustrated and said to a group of students that were speaking Spanish the following words” U.S soldiers are not fighting for you to speak Spanish they are fighting for you to speak English” One of the student that was involved name Vianery Cabrera responded back to by “I laughed first of all, that’s not a language,” Vianery told NBC News. “I have the right to speak Spanish. I have the right to speak English. I have the right to speak whatever language I speak, and that’s my right. There’s no law that says that I should or I must speak English.” The student responded to this by pulling the fire alarm and getting everyone out of school and there they protested.

Hello Franciely, I found your post very amusing. I personally agree with the students in that situation. In today’s world, most American citizens couldn’t tell you the first ten amendments without googling. While many people argue that “soldiers gave their lives for [insert excuse here], not for you to [insert significant cultural/religious/traditional practice]”, this excuse is groundless. American soldiers serve to protect the constitution. the constitution was founded to protect the rights of citizens to practice their culture, religion, you name it. Here is an interesting CNN article I found that reflects my opinions, and I think you should look at: http://www.cnn.com/2017/09/13/politics/poll-constitution/index.html.

Hello Franciely, your post took me by surprise. I agree with one of your student, you do have a right to speak whatever language you want. One of America’s constitution is allowing free speech, therefore the teacher who was against you and your friends for speaking Spanish is wrong. I like how you stated that “I have the right to speak whatever language I speak, and that’s my right. There’s no law that says that I should or I must speak English.” Anyone living in the United States does have the right to free speech in any language they please. I found a website online that talks more about the right of free speech, if you have time you may want to look at (http://www.uscourts.gov/about-federal-courts/educational-resources/about-educational-outreach/activity-resources/what-does). Anyways thanks for your post and I look forward to see what you write next.

I am in agreement with your post about the language we should use in the United States because I feel that everyone should be able to feel comfortable about whatever language they speaking and not have to feel bad and have someone tell them they cant speak that language in this state.

Hi, Franciely! Thank you for sharing. Once we start to think of how far we’ve come in this country, something like this happens in which we are reminded there are still close minded people out there. I agree that anyone should have the right to speak any language they want. Asking someone to only speak English in America is like asking a person to only be a part of the American culture and leave behind any other they may be a part of. I am glad that the student decided to protest, however, not being aware of the whole situation here, I have a question. Did the student have the legal right to protest in the school? Or is that part being talked about right now? Besides the point, again, thank you for sharing, I enjoyed reading your post. I would love to hear more about this.