What Makes an American?

Home What Makes an American? 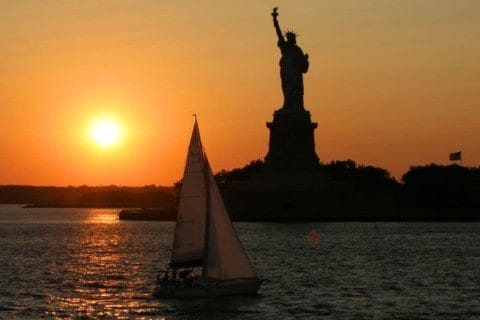 America was designed with an intent that neighbors would encourage each other to practice their beliefs, especially if their beliefs varied because it would mean the Founding Fathers’ efforts hadn’t been made in vain. So long as citizens were free to form their own opinions and practice their own religion, they would have succeeded. Arguments would act as the test of the degree to which the nation was truly free.

When asked to describe what America is and what it stands for, a majority of people say, “freedom.” America is known as “The Land of the Free,” and of course, freedom contributes to what makes America a great nation, but freedom alone cannot distinguish America between other nations. America is not the only free nation. In fact, a study conducted by Freedom House in 2016 found that, of 195 countries examined, 87 were free. America may have been the first, but it’s not the only country standing for freedom. The Declaration of Independence states, “We hold these truths to be self-evident, that all men are created equal, that they are endowed by their Creator with certain unalienable Rights…” This statement alone proves that America was founded with the intent of allowing each individual to live and worship as they chose based on the rights given to them by their Creator. This was the ideal that was meant to be upheld in the country. No other ideal, democracy nor freedom, can be present in the nation if tolerance is absent because tolerance has always been the first concern. In 2017, former vice president Joe Biden wrote, “Reclaiming our values starts with standing up for them at home — inclusivity, tolerance, diversity, respect for the rule of law, freedom of speech, freedom of the press. If these are the democratic principles we wish to see around the world, America must be the first to model them.” Biden recognizes that tolerance produces democracy and freedom. Freedom alone cannot represent America because freedom cannot be present alone.

What does it mean to be American? Asking a person what it means to be American means asking this person where they have come from, what they have lived through, what they have lived for, and how they want to continue living. Each of these questions plays an important role in shaping an American identity. Americans, by definition, come from varied backgrounds, ethnicities, communities, and experiences which in turn produces variety in morality, political views, and objectives. We are a nation with broken homes and “Brady Bunch” families; with solemn ministers and ground-breaking scientists; with conservative legislators and liberal legislators. Taking this into consideration, we as a nation should expect the opposing views that exist in the world of American politics. The only way for a consensus to be met is to agree that Americans, by nature, ought to have opposing views. We should cherish them as they are a result of our unique foundation. We should eagerly debate one another on topics in the hopes of learning something new and reaching a common middle-ground. We should be delighting in our right to disagree and our freedom to live according to the values we individually possess. Americans are frustrated by opinions that differ from their own rather than grateful for the perspective these opinions offer. We are a nation that has forgotten to appreciate the differences with which America was constructed from the beginning.