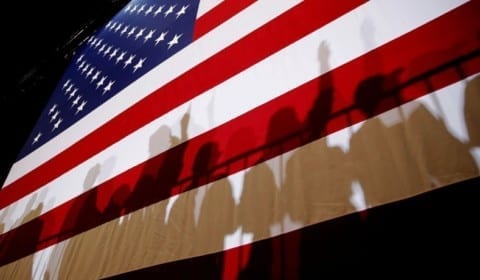 When it comes to the concept of “America”, certain things come to mind. Most people think of opportunity, freedom, wealth, education, sports like football and basketball and brands like McDonalds and Apple. These concepts and institutions symbolize this country to the modern world. The video “Marine Life in the Midwest” directed by Tegan Griffith explores the meaning of America and what it means to be American from a military standpoint.  Griffith, a Marine Corp veteran, states “You put that uniform on to protect their right to [protest] …. When they’re exercising their freedom of speech, my job is, you know, done.” Simply, Griffith is saying that America signifies freedom because we as Americans have the right to freedom, and she protects that right to freedom. Furthermore, Griffith states “I think the American ideal of citizenship is service to others, either through military service, or volunteerism, or advocacy.” In other words, Griffith believes that to be an American is to serve society, which she has done through military service, but that can be done without making the ultimate sacrifice. I somewhat agree with the argument made by this source because yes, America is supposed to represent freedom, but in reality,  religion, speech, and assembly are often restricted or repressed by the government to meet their sociopolitical agendas. On the other hand, I strongly believe that every American should be of service to society but I think there are more effective means to do that than by joining the armed forces. This source leaves out the point of view of people, Americans and foreigners alike, that are opposed to war and U.S. intervention.

In my opinion, America means opportunity. Many people come to America seeking a new life and as Jose Vargas stated, have the mindset that they can achieve the American dream through hard work and determination. The reality is that the system in place is set up so that more often than not, immigrants are working low paying jobs in poor working conditions and being exploited for profit. However, at the end of the day, America provides immigrants with the stability to provide for themselves and their families that drew them to this country in the first place. Above all, I believe that America means diversity. America encompasses a variety of races, ethnicities, languages, and cultures that have completely shifted the demographics of this country. Being South Asian and a woman affect my experience in America because as a racial minority, I have endured racist remarks especially with the intersection of religion,  and as a female, I have dealt with sexual harassment. My race and gender have definitely defined my experience in America because they affect how I compose myself and interact with others. I somewhat agree with the arguments outlined above. I do agree that America represents freedom, but despite being a constitutional right, in my opinion, freedom is more of an ideal than a reality. In addition, I agree with Griffith in that Americans should serve society, but I personally don’t think the armed forces are the most efficient way to do that. Growing up in the Bay Area, I, similarly to Daniels, am critical of America but I also don’t think that we can measure the greatness of a country by its educational and economic standing. I do acknowledge this country’s flaws but I don’t think that they outweigh its strengths. In my opinion, American literature is simply literature that’s written or produced in America by American authors and intended for an American audience.   The structure of American Literature, including the plot, characters, setting, images, and themes don’t follow a specific format, but American Literature should portray the American experience in some way. For instance, the novel “There There” by Tommy Orange is a piece of American Literature under my definition because Orange is an American writer and the novel was published in the United States. In addition, “There There” follows twelve characters as they navigate life in Oakland, California as urban Native Americans, portraying the American experience but specifically through that lens.

Sufa,
Thank you for sharing your opinion of what America means to you. This was very well written and I liked that you stated both perspectives on how America is both amazing and horrible. I agree with you when you talk about America representing diversity. There are so many cultures, races, new beginnings and legacies to be found in this country. I think your diversity and background play a huge role in how you grow up and interact with others. Its interesting to hear about what other countries think about america… and I think you will find this article to be amusing and interesting https://www.businessinsider.com/heres-what-the-world-really-thinks-of-america-2016-8. Keep up the amazing work! Great Job!