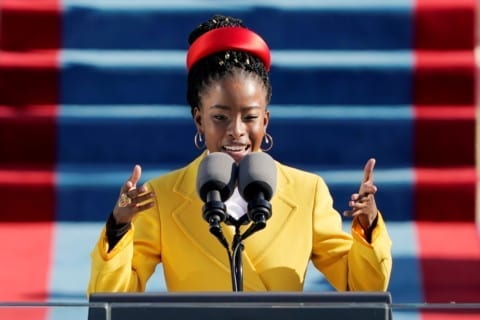 When it coms to the topic of America, some people might think of the flag or Trump. According to Amanda Gorman, “America” means how we repair the damage that we have done to this country in the past. The poem titled “The Hill We Climb” addresses the reasons why America is the way it is and what we have done as humans in the past to make it this way. It also introduces what we should do as a country to make a better future. The author states,” That is the promise to glade. The hill we climb. If only we dare. It’s because being American is more than a pride we inherit, it’s the past we step into and how we repair it.” The author uses facts and examples to describe that to be American, you have to be willing to make a change and actually see the issue in today’s society, not just have American pride. From my perspective, this source portrays America as a country that needs work, which I find to be 100% true.

On the other hand, the video titled “Why America isn’t the greatest country in the world” doesn’t sound very hopeful that America will ever change. “The Hill We Climb” describes America as a country that needs a lot of work but is very hopeful that things will change. However in my second source, the person in the video, is bashing America and only looking at the bad stuff that the country has done to people of color. The ideas found in,” Why America isn’t the greatest country in the world ” emphasis the need to change the way that ignorant people think and for us to be more considerate of people’s background. The guy in the video says,” one day there’s some things you should know and one of them is there is absolutely no evidence to support the statement that we’re the greatest country in the world.” Basically,  he is explaining why America isn’t a good country.

Likewise to “The Hill We Climb” , “Denial is the Heartbeat of America” by Ibram X. Kendi defines America as not what it used to be. In this essay he says, “This is a national tragedy and is not who we are as a nation.” This information shows that he thinks we can make a difference in this country if we come together, similar to what Amanda Gorman was trying to explain in “The Hill We Climb”. However, in the video titled, “Why America isn’t the greatest country in the world” the guy in the video just keeps on bashing America and honestly, I don’t blame him.

In my opinion, America means injustice. My experience as a hijabi Muslim woman helps me see “America” as an injustice that flows through every person of a different race,color,and/or background. I find the arguments listed above to be 100% true. And I guarantee that any person of color is going to say the same. However, I honestly don’t find it possible to end this injustice anytime soon. Too many people have died in the past centuries to say that America is a good place. American Literature can be defined as a way to tell the flaws and achievements of America over the years. Just like the book “The Hate You Give”. I think this is the book that really sums up what America is and always has been. The killings of black people all over America and the hate crimes against Muslims and Asians and so many other races and religions. This is not what America is supposed to look like. “They call it the American Dream because you have to be asleep to believe it.” -George Carlin

First of all, great writing and perspective. There are so many points you make which I agree with, such as how people that are considered a “minority” are treated. As a fellow Mexican student, my life is always shadowed by stereotypes, critics, and judgment. There is such a hidden aspect that I feel others in the US want to hide regarding the justice some people lack to receive from our neighbors. I love the examples you gave, especially your own observation and experience with others.
I wanted to thank you for bringing this topic to light and talking about this sensitive issue some prefer to stay quiet about. Great job.

Hello Halimah,
I really enjoyed reading your post, “America means Injustice.” I was really impressed with the connection you made with the poem, “The Hill We Climb,” this poem definitely reflects American culture and the pride people hold in being American, and that isn’t just being patriotic but finding ways to fix American society. Thank you for sharing your experience as a hijabi Muslim woman and I completely agree with you. As a daughter of Mexican immigrants, it’s hard to think America will change for the better when there is so much hate present within our country.
Estrella Estrada

Dear Halimah:
I am impressed by your post, “America Means Injustice,” because I think you really expressed how the United States has suffered from the lack of knowledge on how to make it a better place. It is important to know that we Americans are responsible for many of the things happening in the country.
One sentence you wrote that stands out for me is: “how we repair the damage that we have done to this country in the past” I think this is powerful because it is saying that is not something that has barely started but for years and years we have been damaging this place.
Thanks for your writing. I look forward to seeing what you write next because I really enjoyed reading your post and the perspectives of others towards the situations here. Also, I think you gave amazing and relevant information on why America is shown as an unfair place or more specifically America Means Injustice.
Fatima Esparza