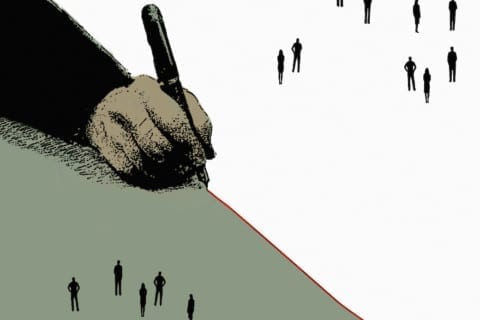 I have lived in the United States of America for my entire life, growing up in the Bay Area gives me different views of what it means to be an American to other people. The idea of what it means to be an American can alter wherever you are in the country. To some it means extreme patriotism and to others it just means to be living here. To me America means freedom and the extreme opportunities given. Yet, others have had very different outlooks on what this country is.

The country that I see as a land of freedom and opportunity has been a land of false advertising to others. The idea of our country being a place where everyone is equal is just a lie. In “Let America be America Again” by Langston Hughes he talks about how America has never really been America. In our own countries Declaration of Independence it states, “all men are created equal.” This part of the document was written by a slave owner which highlights the ways in which our country is built on unkept promises. Langston Hughes talks about all the ways in which African Americans and many other groups of people who have been oppressed don’t have the same opportunities as white people in America. In a particular part the author says, “ O, let America be America again— The land that never has been yet— And yet must be—the land where every man is free. The land that’s mine—the poor man’s, Indian’s, Negro’s, ME—.” This conveys that America means a country that has only worked well for white men so we need to make it a place that works for everyone, as promised in documents like the Declaration of Independence.

While some see America as a country that has not worked for them, others have been able to live the “American Dream”. The Great Gatsby by F. Scott Fitzgerald is a book, told from narrator Nick Carraway’s point of view, about the lives of his wealthy friends. One of those characters, Jay Gatsby, is a very rich man who came from a poor family. This book shows another side of America which is the people this country did not give false promise. As he comes from a poor family and ends up an extremely wealthy man.

Like Langston Hughes said previously, many Americans have not been given the opportunity and freedom they were promised years ago. This same idea is prevalent in Amanda Gorman’s “The Hill We Climb”, a poem she performed at the inauguration of Joe Biden and Kamala Harris on January 20, 2021.  She talks about how we can make America a better place by giving equal treatment to all. The poem states, “Somehow we’ve weathered and witnessed a nation that isn’t broken, but simply unfinished. We the successors of a country and a time where a skinny Black girl descended from slaves and raised by a single mother can dream of becoming president.” The ways in which they do not compare is she seems to talk about how we all need to unify to adopt these standards. This is largely because of how different the country is nowadays versus in the 1930s.

I really enjoyed reading your post because of how relevant it is and the obvious research you put into it. It is extremely well written. America promises freedom and opportunity. Yet, there is an overflow of inequality going on. People do not have the same opportunities as others when it comes to race, gender, religion, etc. Complete freedom does not exist when people are getting arrested/sometimes killed by police for not being white.

This is a well writen comment. I love all of the examples you used in this post and how they are relevant. The points that you bring up are very true and they are also problems that we shiuld try and solve. The facts that back up your points are very accurate and support them well.

I completely agree. I really like how you said that America is the land of false advertising to some. That is absolutely true. Many come here for the many opportunities that are constantly advertised by the country, but are left disappointed when they find that it is virtually impossible to build the life you want without having an in. Why do you think that is? Do you think that it has always been false advertising or was it once true?

I like how this post was written from the perspective of a person with opportunities. You also considered many factors that contribute to inequality including racism and poverty. Maybe try including some effects of inequality and why it is present in the U.S.