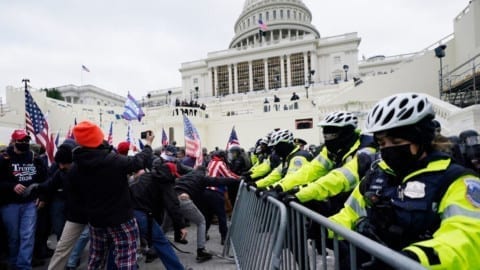 When it comes to the concept of “America”, most people think of a free country with democracy and freedom. However, according to Ibram Kendi, the reality of the American Nation is quite different. The article titled “Denial is the heartbeat of America,” introduces the idea of this country running a false narrative while refusing to admit their flawed bigger picture.

For example, such events as the raid at the US Capitol on January 6, are deemed “un-American.” Let me be clear: the scenes of chaos at the Capitol do not reflect the United States of America. About the US capitol raid, President-elect Joe Biden, along with other representatives and senators, said, “Do not represent who we are.”

What denial allows politicians to do is say that events are un-American, but they are not admitting to the problems, so they are not doing any problem-solving to those problems. So the problems keep happening. They are stating that the U.S capitol raid is not the real “America” and that’s where the denial comes from in this country. In other words, Kendi believes that “to say that the attack on the U.S. Capitol is not who we are is to say that this is not part of us, not part of our politics, not part of our history. And to say that this is not part of America, American politics, and American history is a bald-faced denial. But the denial is normal.”

From my perspective, Kendi portrays America as an outright lie, which I find to be convincing because he provides evidence and other references that reveal America is denying every event that makes it appear like a bad country. The example he gave us was a representation of what it looks like to deny the truth of what is happening in this nation.

On the other hand, the poem “Let America be America Again,” by Langston Hughes suggests that the American dream never existed for lower-class Americans, nor did people have the rights and equality that every immigrant wishes for. Langston Hughes wrote the poem in 1935 and published it the following year. While riding a train from New York City to Ohio, Hughes wrote the poem, reflecting on his life as a struggling writer during the Great Depression.

Hughes addresses his own disillusionment with the American Dream in the poem, implying that the country has failed to deliver on the promise of liberty and equality for all. In addition to condemning America’s unfairness, the poem expresses confidence that the American Dream will soon be realized.

Ibram Kendi defines the  American vision as a lie, while Langston Hughes argues that the “American Dream” never got equal representation in society. I believe that Hughes is arguing that America was in denial during his experience around the 1900s and that in today’s society we are still having these same problems.

In “Let America be America Again,” Hughes expands the idea of denial in today’s society. Hughes writes, “There’s never been equality for me, Nor freedom in this “homeland of the free.” This idea emphasizes that America was supposed to have democracy and freedom, but it became clear that this was a false reality for him and others. Hughes states, “The land that’s mine–the poor man’s, Indian’s, Negro’s, ME- Who made America / Whose sweat and blood, whose faith and pain, Whose hand at the foundry, whose plow in the rain, Must bring back our mighty dream again.”

Since Hughes’ time, we have seen working conditions improve while enforced labor laws and new opportunities have helped those in poor communities. Although improvements have taken place, these alone are not enough. This has been made clear as protests and riots continue to happen around the world. Langston Hughes said that we will soon embody the American dream but this is a hope deferred for many living in today’s world as they face the results of many years of denial from a dishonest nation.

My first and second sources here define America as the idea of denial in a “free country,” while my third source provides the story of an immigrant living through the challenges of denial. Jose Antonio Vargas describes his migration from the Philippines to the United States as a teenager. He discusses his academic and professional achievements while living with his grandparents and holding an undocumented status in the United States. Vargas outlines the challenges he encounters as a result of not having the proper qualifications to be in the United States.

Jose Vargas defines an “American” as someone who takes pride in working hard and achieving their goals. He believes in this in order to figure out why he considers himself an American. Vargas says, “There are believed to be 11 million undocumented immigrants in the United States. We’re not always who you think we are. Some pick your strawberries or care for your children. Some are in high school or college. And some, it turns out, write news articles you might read. I grew up here. This is my home. Yet even though I think of myself as an American and consider America my country, my country doesn’t think of me as one of its own.”

In other words, Vargas is saying that he is living under denial because when he considers himself American, he knows that in reality, this country won’t accept him for being undocumented. Vargas wants us to know that he holds the same ideals as every other American, but in America, it’s defined as someone who lives in the country legally and has proper legal documents proving citizenship.

Hughes writes, “I am the immigrant clutching the hope I seek/And finding only the same old stupid plan/Of dog eat dog, of mighty crush the weak”, which relates to Vargas’s life where he seeks opportunities as an immigrant to follow the “American Dream.”

I believe that the term “America”  doesn’t have just one definition. In my opinion, America is a country that boasts the illusion of freedom when in reality, many are left out of this picture.  As I’ve researched above, we see the story of Jose Vargas and his challenges in the U.S. I agree with the sources because I can tell that their definition of America is applied to today’s modern America. From this country being in denial, the limited freedom for many, to experiencing the challenges undocumented immigrants faced.

As a Latin-American male, I realize that my upbringing and ethnicity set me apart in a number of ways. Because of this fact, I also found that some people in America may stereotype me and this has influenced my experience in America. I still believe that there is not just one definition of America because everyone has different experiences but, I can say that there is denial in this country.

American Literature, in my opinion, can be described as literature composed of various people’s stories about America, their experiences in America, and their definitions of America. In Jose’s, “My life as an undocumented immigrant,” his own definition of America was to be hard working in society to be able to become a citizen. That wasn’t the case for only Vargas because many other undocumented immigrants are having the same issues as Jose in today’s world.