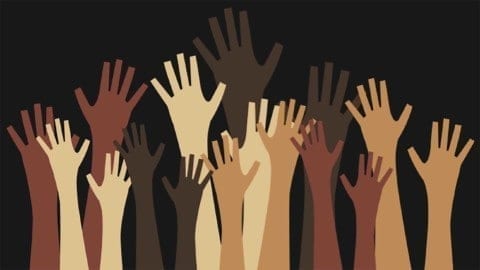 When it comes to the concept of America, most people think of fast food and “The American Dream.” According to Damien Caves and Todd Heisler’s project where they interviewed people along Interstate 35 about what it meant to be American, there was a large variety of responses.  The article titled “Way up North” examines how people coming from different backgrounds define America. One interviewee said, “Being American? There are all sorts of ways to do it here, but I think the concept is to have everyone get along together-to have a better understanding of different cultures.” In other words, they are describing America as a country that doesn’t have one distinct culture, but rather a country that unites many cultures to form the American identity. Furthermore, they elaborate by describing how because of the diversity in America, there must be a willingness to understand others who are different from yourself. In my opinion, this source portrays America as diverse, which I find to be a very important part of what makes America unique. America is a country of immigrants, which I think is a central aspect of American identity. Because of this, a diverse group of people can bring parts of their culture such as food, art, and beliefs to form “American culture.” I also think that while the speaker emphasizes the importance of having understanding for other people from different cultures, there are lots of people who don’t welcome this diversity and are anti-immigrant, even though most of us are immigrants or come from a family of immigrants.

Source 1 emphasizes the importance of having a willingness to understand people from other cultures, and Source 2 describes how American Indians are treated by the government, expanding on the lack of understanding for their wellbeing. The information found in Russel Means’ Statement to the Senate Special Community on Indian Affairs describes the unfairness American Indians have been subjected to as a result of discrimination. Russell Means says “We can be anything we want to be except American Indians.” This is a powerful quote because it suggests how a fundamental value of America is that you can be anything you want to. However, he is describing how the government has passed laws throughout history up until the present day that targets American Indians and makes it difficult for them to succeed. In other words, despite Source 1’s call for understanding, discrimination continues for many groups; including on America’s first immigrants.

In my opinion, America doesn’t have one culture because there is such a variety. However, I think an important part of American identity includes the idea of diversity. My experience of growing up in the Bay Area helps me see “America ” as multicultural and diverse. The Bay Area is generally a very welcoming and liberal place which gives me hope for the idea of compassion of people who are different from yourself to spread more throughout America. I find the arguments outlined above to be very good sources of what makes America special. American literature can be defined as a literature that captures the American experience and develops the American identity. In the book “There There,” the author captures the experience of Native Americans in the present day, examining how history has affected them. The book highlights how the oppression that American Indians have experienced since colonization continues to impact them today bringing the importance of more understanding for other cultures to attention.

Dear < Claire, I am touched by your post it really spoke to me in a way that I now have a different perspective about "America" One thing you said that stands out for me is: “Because of this, a diverse group of people can bring parts of their culture such as food, art, and beliefs to form “American culture.” I think this is interesting because America is about bringing people together to form a group and sharing different cultures is one of them. Your, post reminds me of something that happened to me. One time I had to bring food from my country to share with my school because it was culture week and sitting at different tables and trying new food really brought me closer to my classmates and the understanding of their culture. Thanks for your project. I look forward to seeing what you write next because it was an inspiring topic.

I am Kaitlyn from Judge Memorial Catholic High School in Utah. Your post is really interesting to me and had many different insights I have not thought about or heard before reading it. America is a very unique place in that most people come from many different places, cultures, and backgrounds. I agree with you when you say that America means diversity. Although some people see differences of people as something to be feared, I think diversity makes America intriguing and quite fascinating. It is super cool to think about all the different cultures in this country, and yet, we are all together and connected in our differences.

Thanks for sharing your thoughts on this topic!