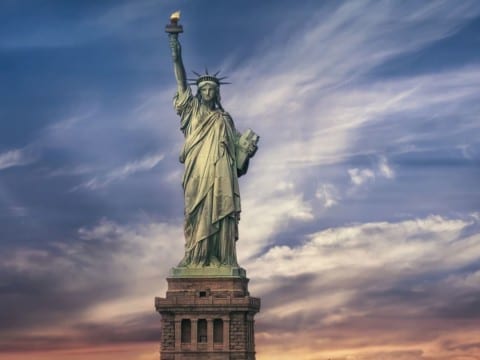 When it comes to the concept of “America”, most people think of it as the land of opportunity, where anyone can set their mind to a dream and be able to achieve that goal, as long as they put enough effort into it. According to American poet Langston Hughes, “America” is a beacon of light for those wanting to pursue a dream; however, the privilege of fulfilling that dream only applies to certain groups of people – specifically whites. Hughes expresses this idea in his poem, “Let America Be America Again”, by wishing that “O, let my land be a land where Liberty is crowned with no false patriotic wreath, but opportunity is real, and life is free, equality is in the air we breathe. (There’s never been equality for me, nor freedom in this “homeland of the free.”)”. In other words, Hughes has been conditioned to view America as a savior nation, however he has not been treated by America in the glorious way that others describe it as.

Similar to Hughes’ poem, Dr. Ibram Kendi also expresses his discontent with the way America is composed. The ideas found in Dr. Kendi’s essay, “Denial Is the Heartbeat of America” emphasize the causes of American racism, which he claims stems from denial of racist, historical American tragedies as “American”. As a very relevant and recent event, the siege on Capitol Hill in early January 2021 is a powerful example that Dr. Kendi uses in his essay to show that continuous denial of these types of incidents as part of American history is what fuels everyday racism. Essentially, Dr. Kendi believes that Americans pass off racist events as “not American” because of convenience, and that this behavior is what preserves racism, as it deflects blame from the people uttering these words, as quoted by multiple politicians and officials.

Likewise, Hughes and Dr. Kendi describe America as systemically racist, while Amanda Gorman takes a less critical and more optimistic tone in her poem, “The Hill We Climb”, spoken at President Joe Biden’s inauguration. When Gorman writes, “And yes we are far from polished, far from pristine. But that doesn’t mean we are striving to form a union that is perfect. We are striving to forge a union with purpose.”, she recognizes that America holds inequalities, and those holes need to be filled, but the current generation is working to make racism a thing of the past; the need for a ‘perfect’ country is unrealistic, however there are people fighting for equality and trying to improve our country’s systemic issues.

In my opinion, “America” means a land of hope, with a large asterisk that represents the dependency on what region or country you come from, what your skin color is, what language you speak, your political position, and other social characteristics. For white Americans, the definition of America is the stereotypical one: the golden nation of opportunity, for others, the further from white men it gets, the more systemic oppression they must face, and their lives in America will be challenged by the bias in place. My experience as a white male is not accurate to say that I have been given special allowance, rather that my life has not been affected or made difficult by my origin or sexuality. I find the poems above impactful because I will never understand what these authors, as black Americans, go through in their day-to-day lives. As a young person living in America today, I will admit that the efforts I have put into changing society for the better are marginal, as social justice is not one of my interests, however I will look to these authors as inspiration for perhaps future changes I may do later in my life.