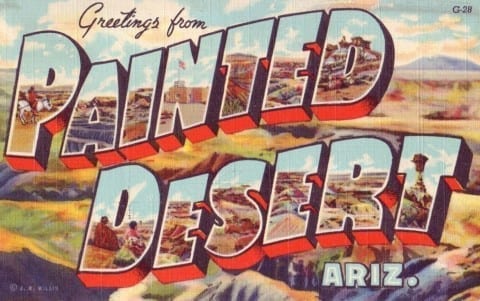 The little white church was alone in the desert.

Any towns that had huddles around it, hiding this single sacred space from the elements, was gone. Lost to the sand or fire, no one remembered.

But the little white church stood alone. It’s glass windows shattered by the winds and the sands.

If you stood in the front door you could see nothing but sand, cacti, and the occasional tumbleweed for miles.

Inside, the sands of the desert had blown through the open wood door. It sat in ridges, like miniature dunes in the aisle.

The pews sat like sentinels, uneven and worn. Sun bleached and rough. The pages of a leftover hymn book lay scattered.

the rose window was mostly intact, the only window that the desert had not blown out in its rages. A few colored shards were shattered beneath it. Adding their purple, orange, red, green to the dust on the alter.

It seemed they had taken it all when they left. The candle sticks, the Bibles, the crucifix. All but a rosary. Dropped, it seemed , at the foot of God. Left for Him in the sand.

Watching the sunrises, breaking across the landscape warming the cold, dead, sands.

Watching the stars in their never ending cycle.

A tiny cactus had grown in the sand by the door after the rain. Soon i died though, the desert was not forgiving, not living, not nurturing. It had no other’s heart. Only the back of her hand.

But it left the church. Standing alone with its white washed walls. Blinding in its Christian resilience. Plaster walls and glass windows. Alone.

Natalya,
This is so well written! I love your word choice, the ending is perfect and the tone overall really makes this setting realistic. Great job!