Alice’s Adventures in Wonderland: ​an analysis and review

Home Alice’s Adventures in Wonderland: ​an analysis and review 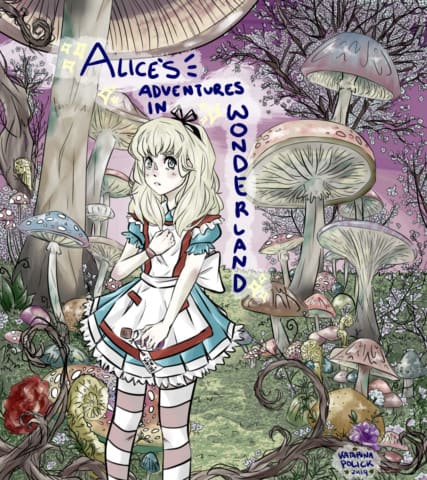 World-renowned author C.S. Lewis once stated “Someday you will be old enough to start reading fairy tales again”, a particular quote that always resonated with me, and I honestly find very truthful. Whenever I think about C.S. Lewis’ sentiment regarding this particular point, I am almost always immediately reminded of the novel Alice’s Adventures in Wonderland ​by Lewis Carroll.

The story of ​Alice’s Adventures in Wonderland ​ struck me as particularly interesting as it has been extensively talked about, decades after its original debut in 1865. Often speculated to be somewhat of a parody of classical Victorian children’s literature, as well as a political commentary of some sort, the story follows Alice, a young protagonist living in the mid-Victorian era. After believing to see a rabbit holding a pocket watch- a most peculiar sight indeed, she then stumbles down a rabbit-hole, beginning her adventures in the rightfully named nonsensical world of “wonderland.”

Alice encounters many challenges upon her arrival, some involving strange cakes and drinks that make her shrink, to a furious queen whose only interest seems to be beheading her fearful subjects. At first, Alice is shown being scared and lonely in the mysterious world of wonderland, however by the end of her adventures she seems to have gotten used to the overall madness present in Wonderland, which I interpret as a strong allegory on the central theme of growing up. One way that the novel presents the theme of growing up, would be through the way that Alice’s “wonderland” becomes an abstraction of the “real-world” through the eyes of a child.

An example of Alice’s wonderland being an exaggeration of what the world looks like in the mind of a child (particularly Alice in this case) would be in chapter 4, where Alice meets a magical cat who has the ability to disappear and reappear at will, named the Cheshire Cat. The Cheshire cat then tells Alice “We’re all mad here. I’m mad. You’re mad.” Alice then questions the cat how he would know if she’s mad, to whom the cat replies “You must be… or you wouldn’t have come here” (Carroll 50). That interaction between Alice and the Cheshire cat shows how nonsensical and upside-down wonderland is, alluding to the idea of the world that Alice fell into to be no more than the real world being reflected by her imagination.

In many ways, the theme of Alice growing up can be observed in the story through the dialogue and the narrator’s descriptions of various scenes, and I believe that Alice’s struggles with loneliness can be the most apparent throughout her adventures. An example of how much a sense of loneliness is present during Alice’s journeys would be in chapter 2, where Alice, out of curiosity, eats a magical cake that makes her grow to abnormal heights, partially causing her to forget certain details about herself. In a moment of panic and confusion, Alice bursts into tears and states (most likely directed toward her friends and family located on the other end of the rabbit-hole): “I do wish they would put their heads down! I am so very tired of being all alone here!” (Carroll 11). This statement from Alice shows her complete helplessness and feelings of solitude when she first arrives in wonderland, a sentiment that is later repeated in chapter 3.

After slowly shrinking back down to her regular height (after eating the magic cake from the beginning), Alice ends up meeting a talking mouse who brings her to converse with other peculiar talking creatures. After Alice mentions her cat Dinah, the creatures all get extremely frightened and leave her all alone once again.

I found it very interesting that the narrator refers to the protagonist as “poor Alice” repeatedly throughout the novel. This can be seen when the narrator states; “Poor Alice began to cry again for she had become very lonely and low-spirited” (Carroll 23). These two instances of Alice suddenly feeling extremely alone in this new place that she has tumbled into can closely reflect the possible feelings someone facing adulthood might have when first starting out. Unable to reach the security of the way of life she had before, Alice has to learn how to act independently, and adapt to her new surroundings by herself, much like growing up and learning to adapt to the “real world.”

Aside from all of its themes, the novel also partakes in various different writing styles to convey some more “hidden” meanings, something that find particularly interesting. The novel includes sonnets, wordplay, riddles, and even a picture poem on page 21.

I also really enjoyed reading ​Alice’s Adventures in Wonderland ​ because of the excellent use of perspective. Having a narrator be a bit distant from the action in the novel, while maintaining a strong focus on the protagonist is essential; however, the novel takes it a bit further when the narrator occasionally “breaks the fourth wall,” points out the pictures in the book, and acts like it is conversing with the reader, making the story often very immersive and dynamic.

All in all, I would highly recommend reading​ Alice’s Adventures in Wonderland by Lewis Carroll, since it has captivated new readers for generations with its absolutely peculiar and fantastical elements!