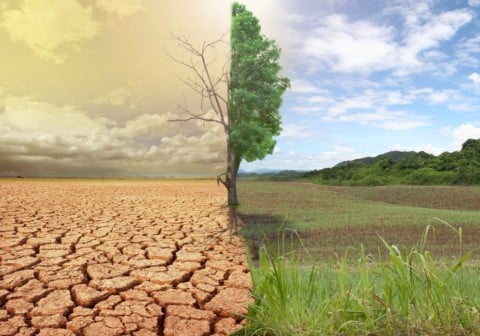 While when considering climate change, many people only look towards non-renewable energy sources as the culprit, this is not the full picture. Many people fail to see the other source of the problem, being agriculture.

Due to the growing population, and demand for meat and dairy products, the agriculture industry is expanding and taking up more and more land. This creates an array of problems including deforestation, methane emissions, carbon emissions, and food and water shortages.

As stated by the European Environment Agency, “Farming in particular releases significant amounts of methane and nitrous oxide, two powerful greenhouse gases.” The prospect of expanding agriculture is both destroying habitats in the wilderness, while also accounting for further toxicity of the air, a lack of space, and a shortage of food and water.

As there becomes a greater demand for meat and dairy, more land must be occupied to house these animals. In fact, “1­2 acres of rainforest are destroyed every second” (cowspiracy). Along with this, these animals require copious amounts of food, resulting in 660 gallons of water going into the production of just one hamburger (cowspiracy).

So how can this be addressed? If the world was to make a collective effort to cut back on meat and dairy consumption, more food and water resources could go to feeding those in third world countries instead of to livestock. Also, we would be bettering the Earth as a whole by reducing greenhouse gas emissions, and preserving what is left of our scarce land.