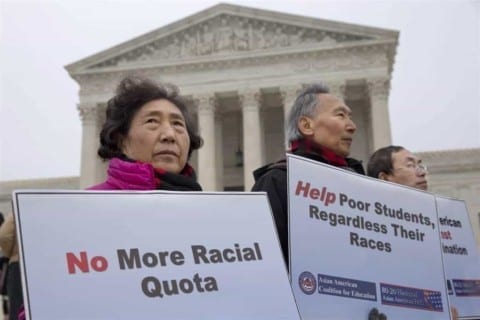 Why do we still have outdated affirmative action laws? They allow colleges to take in minorities with scores much lower than other students. I am not saying we should discriminate, but the statistics speak for themselves.

This is not fair. 1150 is barely enough to get into MSU, let alone an Ivy League. I am well aware original reason we have affirmative action, but the times have changed, the system needs to be reworked. The quota system is outdated and we need a better way. To start, we need to get rid of the race box where you check off your ethnicity. And if we’re doing that, why not get rid of the gender box too. And if we’re going that far, then why not get rid of the need to put your name on the application.

Studies show that people discriminate against a name that sounds clearly ethnic versus a name that is not. (Jose or Joe, Deon or David, etc.) I firmly believe that a college application board should only look at your essay, transcript, recommendation letters, and standardized testing scores.

Of course, you would tell the college you gender and other information, they only get to see it AFTER you are accepted. This would solve for racial bias in college acceptance rates, and also work to get rid of subconscious discrimination as well.

great article and I agree with what you say