Adaptation of “The Devoted Friend”

Home Adaptation of “The Devoted Friend” 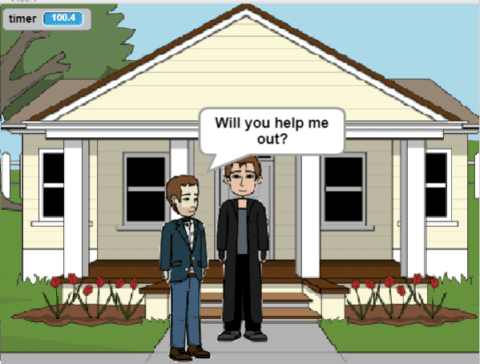 While many fairy tales focus on consequences of a bad moral decision, one named The Devoted Friend by Oscar Wilde shows the consequences of a good moral decision followed by bad actions. It revolves around a florist and miller, which mainly takes place when the florist, Hans, needs money. The miller, Hugh, a friend of Hans’ rises to action and gives him a wheelbarrow for him to use. However, Hugh then somewhat blackmailed Hans and forced him to do chores for him, threatening the wheelbarrow whenever he asks to not do it. Later, when out in bad weather doing a chore for Hugh, Hans dies. During his funeral, Hugh stated that it was a huge loss for him as the wheelbarrow was worth nearly nothing and Hugh could have still made Hans do more work for him. I have created an animation which presents a slightly altered version of the fairy tale, where when Hans asks for money, there is an interactive decision by the viewer.

In the alternate version of the original story presented, Hans turns around his fortune in two months time, and Hugh becomes in need of money. Hans, even when remembering what happened when he was in that situation, gave Hugh the money. However, Hugh soon gets into an accident, relying on the money Hans gave him for life support. When he gets well, he throws a party and thanks Hans immensely for his generosity and pays him back the money.

To create this animation, I first began with a script to follow during the animation and slightly change in the storyboards. My script had two acts, with the second following the interactive decision and being split into parts A and B. I next created storyboards, which helped summarize each of these acts and showed the general concept. Lastly, I began the animation, following the script as best as I could and added the interactive decision using the “ask” and “answer” blocks.

If you would like to see each of these things, they are shown in the following google doc down below: