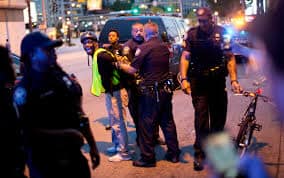 Police brutality is a real issue in America. Did you know In an article “Law Enforcement Killed 90 Oakland Residents Since 2000, And 74 Percent Were Black” by Alex Barreira and Arielle Swedback, it explains “The most alarming discovery: 74 percent of Oakland residents killed by law enforcement between 2000 and 2016 were Black men and women” (Barreira, Swedback). This event  is startling because the officers decide to pull over black men more often than white men. Based on the research, Police Brutality is an issue in Oakland because the police began to target the black men rather than the white men. This will then lead on to other black people not having any trust in police officers because of what they have seen people experience an encounter with a black man and a police officer.

Race is playing too large of a role in policing in the country. After reading the article “Police Brutality Against Black Kansas City Man Caught on Video” by Gillian Wilcox it showed that black people get pulled over more often than white people. The percent of black men getting pulled over is 85% higher than white men because the cops hide behind their badge. “hide behind their badge”,  means they feel like they have all the power in the world and the cops also think they can get a free pass with doing such terrible things to people just because of their badge.

The problem with current day police officers is abuse of power, which is why policing has become racist. Abuse of power is police officers thinking since they have a badge, they can get away with racism. But not always, have you ever heard about Oscar Grant? He was a victim of police brutality here in an Oakland bart station. It was after New Years, he was “involved” in a fight. The article “The Shooting Death of Oscar Grant”  stated “On New Year’s Day 2009, an Oakland police officer shot and killed an unarmed, pinned suspect.”(Head). The “suspect” was Oscar Grant he was shot by a police officer which left him dead but the officer was actually tried in court and charged with  manslaughter “The former California transit officer who shot and killed Oscar Grant on a train platform in 2009 said he disagreed with a jury’s verdict convicting him of involuntary manslaughter.”(Fernandez) This quote represents the proper way officers should be “handled”  with which is a proper court case and a removal of their badge.`

On the contrary, some feel police are getting led into using excessive force. For example a comment on an article titled “Police brutality or doing their job?” , A commenter had talked about how it was the girls fault for “resisting” arrest and how she didnt give the police officer her I.D so she got what she deserved. The comment by L. Kelly stated “She did not follow the policy/law that COD put in place. If she is that stupid to think she is above any “law” put in place, then refusing to give her ID to an officer, then she is the one resisting.”

To conclude, police brutality is majorly associated with racism and something has to be done about it. What has to be done is the officer should be tried in court and punished for whatever acts they commited. Something I recommend to anyone who reads this is if you have a negative encounter with a police officer, take out your phone and begin to record the situation. By law, the police officers can not stop you from recording. So if you are a person of color reading this, please be careful whenever you have any type of encounter with a police officer.

.
“Law Enforcement Killed 90 Oakland Residents Since 2000, And 74 Percent Were Black.” is an article from the website “East Bay Express”, the article is about  how in the year 2000, police officers killed 90 Oakland residents and 74 percent of them were black.

The topic you decided to write about is a really big issue in this country. I believe that people of color have always been seen as less than any other race. With racism still being an ongoing problem, those who have more power over others think it’s easy to get away with things such as killing someone else. I totally agree with you when you say that “Race is playing too large of a role in policing in the country.” Priority is often given to white people and they’re also more likely to get away with certain things because of their skin color. Your suggestion about recording a conversation with an officer when being harassed by then is a good idea. There has been videos throughout social media showing how certain police officers abuse of their power and use force when in some cases is not even necessary. This videos have brought this problem to light and even though the changes haven’t been big, there has been an improvement. I hope just like you that this racism and abuse of power will disappear one day!

Thanks for sharing this blogpost! As an English teacher, I’m particularly interested in the way you write and set up your points. I like the opening hook (starting with a punchy first sentence and following up with a question). I also like that you pose the opposite side of the argument by sharing the comment made by L. Kelly in support of the police action against the young girl in the article. Although I don’t necessarily agree with L. Kelly, I think you strengthen your own point by showing the dissenting opinion. Maybe you could follow up that paragraph with a transition that contextualizes L. Kelly’s complaint, counters the argument, or brings us back to your main argument about police brutality.

Finally, great work including a suggestion for your readers on ways to deal with police brutality in their own lives. It is an unfortunate reality that people have to deal with this fear–and you are so right to point out that this is a cycle of hatred, with police abusing their power which leads others to distrust and fear, which then leads to police further abusing their power.

Keep writing!! Thanks again, and feel free to comment back 🙂

Nahum,
You have provided a strong argument for the connection between racism and abuse of power by police in Oakland. I like how you provide actual data as evidence to prove your point. There have been so many stories in the news of excessive force being used by police in situations involving young men of color. As I read your post, I couldn’t help but wonder how a police officer would respond to your blog post? What might they say about these situations? It is definitely an emotionally charged issue on both sides.

You mentioned that young people encountering police should take out their cell phones and record the situation. I also wonder what the community could do to defuse the emotions and improve the situation. If you continue researching this issue, I would be interested in what the city of Oakland or even the Oakland Police department are doing or could do, to change how these encounters play out so that no one gets hurt, and everyone is treated humanely and with respect.

Thank you for adding your voice to this issue that is tearing neighborhoods apart and causing so much pain.

The statistics you shared in your post a quite shocking. Especially that, “law Enforcement Killed 90 Oakland Residents Since 2000, And 74 Percent Were Black”. Racism, while less serious than that of the 1700s, is still a very big issue in society. It is sad to see racism leading to the death of so many individuals. Police brutality is something that should be talked about more. Yes, police need to do their job, and should be able to use force accordingly, however we need to set more guidelines as to what really justifies serious force. Here is yet another article telling a case of police brutality.
https://www.aclu.org/blog/criminal-law-reform/reforming-police/being-black-not-crime-yuneks-story-police-brutality?redirect=blog/criminal-law-reform/reforming-police-practices/being-black-not-crime-yuneks-story-police

Dear Nahum,
I see what you were saying all that you wrote about has evidence and statistics that support it but you talk a lot of police hiding behind their badge when they use force on people and that is one of my main questions when police ask about and I.D to someone they need to see more because they are disobeying police and dont they also need to put them down when they keep resisting because they also need to cooperate when they refuse to. I just think that you should include this in your article.

Dear Nahum,
I am agreeing with our post because police do take advantage of how much power they have. Also I feel that you were speaking the honest truth, therefore I agree with what you say.There was one sentence that stood out to me ” the cops hide behind their badge”. This sentence stood out to me because like you said they use their badge to make commands to the Oakland residents. Your post is good because I don’t think people don’t really see it as a problem since police have a gun, badge, and a uniform people don’t want to mess with them. I want to thank you for writing this blog I hope it lets people know what’s really going on in the world.

Hi Nahum,
You made a great point tying in racism and police brutality within the Oakland community. I really like how you give data to support this point. Just going on social media or flipping on the news it feels like there’s always a story about some abuse of power going on. It makes me wonder what can we do to help?

You mention that people should “take out your phone and begin to record the situation“, which I totally agree with. It might be more dangerous to try and actually stop a situation, given that a cop is involved, but by recording it on video you at least have visual evidence to potentially help the other person.

Overall I really enjoyed reading this piece you wrote and want to thank you for voicing your opinion on something that is a very real issue in not only just Oakland but in society!