Abuse at the Border

Home Abuse at the Border 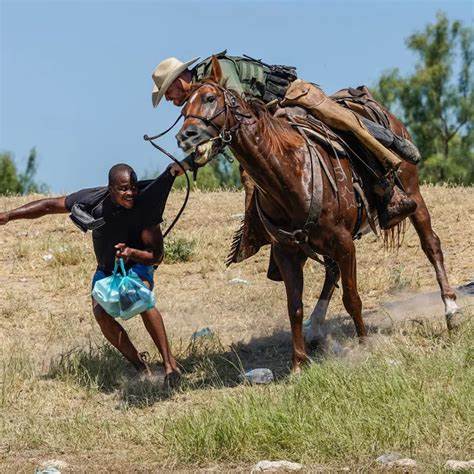 There is a huge problem in our Country that people just don’t talk about. The problem I am referring to is border security. Haiti, a Caribbean country off the coast of Florida is currently going through some internal problems such as political and economical, making it not only financially difficult to live there but dangerous. People are fleeing the country and mass numbers, a popular destination for these refugees is in Texas.

More than 14,500 people fled to Texas after conflicts in their home country, when the refugees arrived in Texas they were met by Border Patrol officers. These officers were on horseback. These officers rode around whipping these people and grabbing and dragging them. If this is supposed to be the Land of the free, why is it so hard to obtain this so-called freedom.

People like to sit and blame one president for all of the countries problems, border security being one of them but this isn’t the fault of just one bad orange looking guy. It has been statistically shown that Obama has deported more people in his presidency than any other president in history, There is data that shows the large jump in deportations, ”Data provided by ICE dating back to 1892 records that annual deportations jumped into the hundred-thousands in 1997, when the U.S. deported 114,432 people. Just one year earlier, the U.S. had deported only 69,680 people.” President Biden who promised change in the way that border security would be handled but has encouraged the crackdown on Haitians entering the country for refuge. Nbc news said “Next week, ICE plans to fly eight deportation flights to Haiti and will then increase that number to 10 per week, according to one of the documents. A few deportation flights just restarted in the past few days in response to the surge of Haitians.” This is a national problem. There has to be some kind of reform in the government so that the freedom everybody talks about can be accessible to all.