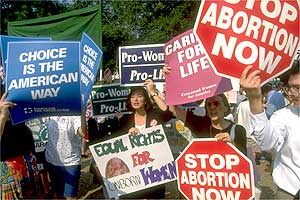 On January 22, 1973, the US Supreme Court legalized abortion stating it as a part of a woman’s constitutional right to privacy. The big debate over abortion is continually dividing our nation and its beliefs, a big issue which raises arguments. The pro-con debate of “pro-life” or “pro-choice” have many different reasonable justifications. One of the most widely disputed topics in our era and it comes down to one question; should it be banned or legalized?

Pro-life is when a person believes that abortion should be illegal. The definition of Pro-life is “advocating the legal protection of human embryos and fetuses, especially by favoring the outlawing of abortion on the ground that it is the taking of a human life” according to The Free Dictionary by Farlex. Those who are pro-life say abortion is murder. The killing of an innocent human being is wrong, even if that human being has yet to be born. Maureen Condic, associate professor of neurobiology and anatomy at the University of Utah School of Medicine, explains that the “most primitive response to pain, the spinal reflex,” is developed by eight weeks gestation, and adds that “There is universal agreement that pain is detected by the fetus in the first trimester.” So basically, fetuses feel pain during this process of termination. By the time a baby is conceived, he or she is recognized by God. In Jeremiah 1:5: “Before I formed thee in the belly I knew thee; and before thou camest forth out of the womb I sanctified thee…” The  US Supreme Court decision Roe v. Wade was completely wrong and should be changed, destroying a life is never okay, and should not be tolerated. Republican candidate Donald Trump says “I am pro-life. The answer is that there has to be some form of punishment (for women). Some form of punishment (if abortion occurs).”

Pro-choice is when a person believed abortion should be legal. The definition of Pro-choice is “ individuals have unlimited autonomy with respect to their own reproductive systems as long as they do not breach the autonomy of others.” Those who are pro-choice say that abortion is a “fundamental right” guaranteed by the US Constitution. The 7-2 US Supreme Court decision says that the Constitution gives “a guarantee of certain areas or zones of privacy,” and that “This right of privacy… is broad enough to encompass a woman’s decision whether or not to terminate her pregnancy.” Women are very independent, and have a right to choose decisions that will affect their lives and their futures. Choosing whether to have children or not is completely that woman’s decision, and having that choice in reproduction empowers that woman. According to a 2010 review by Britain’s Royal College of Obstetricians and Gynaecologists, “most neuroscientists believe that the cortex is necessary for pain perception.” So basically, fetuses cannot feel pain during the process of termination. A Sep. 2013 peer-reviewed study comparing the mental health of women who received abortions to women denied abortions. According to Abortion ProCon found that women who were denied abortions “felt more regret and anger” and “less relief and happiness” than women who had abortions. The same study also found that 95% of women who received abortions “felt it was the right decision” a week after the procedure. Democrat candidate Hillary Clinton says “I believe we need to protect access to safe and legal abortion, not just in principle but in practice. Any right that requires you to take extraordinary measures to access it is no right at all. Not when patients and providers have to endure harassment and intimidation just to walk in to a health center. Not when, not when making an appointment means taking time off from work, finding child care and driving halfway across your state..”