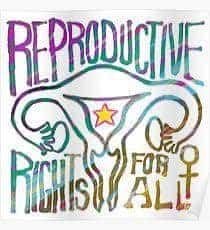 After an extensive survey I distributed to over 100 respondents, I was able to find a general opinion of different populations on the subject of abortion, and also some misconceptions that many people have about the process, the outcomes, and the potential dangers of bringing an unwanted child into the world. The most shocking dichotomy between what on the surface looked to be relatively similar questions was evident in results regarding the use of birth control. 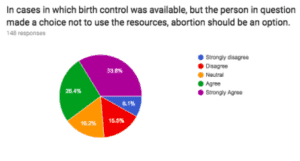 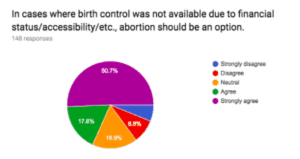 When there is a choice of using birth control, and the person in question has that option readily available, a surprising 23.6% of the population asked agreed that abortion should not be an option under any circumstance. Initially, I would have agreed with this viewpoint. But some of the short answer explanations shifted my view slightly: if the parent of the embryo isn’t responsible enough to use some form of birth control when it is readily available to them, than why should they be considered responsible enough to bring a child into the world? As discussed previously, bringing an unwanted child into the world can have many detrimental effects on several lives, especially that of the potential child’s. These dangers include poverty, the faulty adoption and foster care systems, and their resulting emotions and reactions to the ways they were raised such as higher rates of crime, unemployment, and mental health issues.

Another very controversial topic within the survey was related to the subject of health of both the embryo and the carrier:

A much larger portion of the population agreed with termination of the pregnancy in the face of possible threats to the mother, or carrier’s health. However, compared to more than 80% compliance, in the face of possible threat to the embryo, only 65.6% of the population asked agreed to the opportunity of abortion as an available option. Though this is a very difficult question to answer, there are many factors to consider when responding. First of all, this question is not to say that any embryo discovered to have a terminal illness or risk thereof should be aborted, but the option should be available due to the additional costs, risks, pain, difficulty, and physical and emotional toll in both raising and growing up as a child or person with a severe disability. There is obvious beauty in raising a child, despite the struggles in life they may have. L. Hickman of San Antonio, Texas says, “I have learned, and grown, more since Dylan’s birth than any other time in my life. You learn patience, and you get to witness miracles that you otherwise would have been too busy to have noticed…You learn acceptance, you realize you have been wrong to judge, and you learn that there is a thing called unconditional love.” However, often times the most common reactions include shock, denial, grief, guilt, anger, confusion. Most parents are never taught or educated in how to communicate or interact with, let alone raise a child with disabilities. “Our children had Down syndrome, seizure disorder, holes in the heart, premature birth, deafness, and cerebral palsy. I hated the repeat surgeries…I struggled with how to respond to strangers,” said J. McDermott from Bethesda, Maryland. The most common question in this kind of issue is “What kind of lifestyle or future can that child lead? Will they ever be truly happy or satisfied with the potential they carry?” It’s difficult and often impossible to answer these kinds of questions, but oftentimes, one must put themselves in the others’ shoes. Children with disabilities cost a lot of money, often go through a lot of emotional trauma, and are more often than not given up for adoption. Very rarely, if ever, are these children ever adopted permanently and they typically end up within the foster care system where it is not uncommon to see clear signs of abuse and neglect.

Annie,
I am so glad you picked this as your research topic as it’s incredibly important we talk about it. Many people are only able to see their side of this controversy and cannot fathom the opposing viewpoint. I myself am guilty of this. I am a firm believer in women’s reproductive rights and even the thought of not having the option of abortion open to all women makes me a little livid. I am so glad you were able to discuss the reasoning behind both sides without excessive bias and emotion because, from my own observation on this topic, if you get emotional and don’t take into much consideration the other viewpoint, things go south fast. Your reasoning is very solid and well stated and just overall pretty sound. I hope to see where you have gone with the rest of this research paper!

Annie,
I liked that you picked such a controversial topic and used your findings to generate your opinion rather than to make one without thinking it through. I really enjoyed reading about not only your response to the topic but also the responses of many others. Your information was clear and concise and seeing those responses from 100 others all through the easily understandable graph was very helpful. You might be interested in the article https://www.nytimes.com/2018/02/01/opinion/abortion-democrats-compromise.html that talked about how last month our senators voted down the republican bill banning abortions after 20 weeks, making this a very current and real issue. I look forward to hearing more.