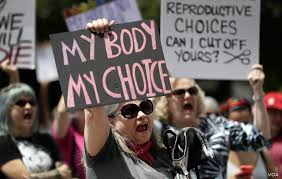 In one article about abortion, in talked about how in 2008, an estimated 86 million women had unplanned pregnancies. It also talked about how the only person that should make the decision to have an abortion should be the pregnant woman herself. Her body, her choice.

Forcing a woman to have an unwanted and unplanned pregnancy that could be life-threatening is very dangerous and puts her life in jeopardy. Having access to safe abortion services can save that woman’s life. One article says, “denying women access to abortion is a form of gender discrimination.” This is said because laws restricting abortion prevents women from exercising their human rights or fundamental freedoms. This is on the basis of equality with men.

Another article talked about how women have a moral right to do what they want with their own bodies. It is vital for gender equality for women to have this right. Banning abortion only puts women with unplanned pregnancies in a positiion where they might go use unsafe and illegal practices. In this debate of banning abortions we should look at women as people and not just as a “container for the foetus.”

Dear Sophie,
I would agree with you that a women should have the write to have an abortion but I feel you have to look at it from both sides. The argument “My Body, My Rules” is not an argument at all. It is a lazy excuse for you to kill a living human being. Thats why I liked when you talked about how it could be life threatening.
https://time.com/5684858/international-safe-abortion-day/
Heres a good article I found about the subject.
-samuel

I completely agree with you on this Sophie. It should always be the mom’s choice when it comes to abortion. Banning abortion is not only just plain cruel, but like you said it can also be really unsafe. I remember this story that was in the news about how there was a 12 year old girl from Alabama who was raped and got pregnant. But because of the new laws against abortions there she couldn’t get one/ so both her, and the baby’s live’s were in extreme danger. I’m not entirely sure of what happened to her but I remember hearing about it and just being shocked that because of some male politicians making a completely ridiculous decision some poor girl’s life was in danger. Anyway, this was incredibly well written and very persuasive. I can’t wait to see what you write about next.