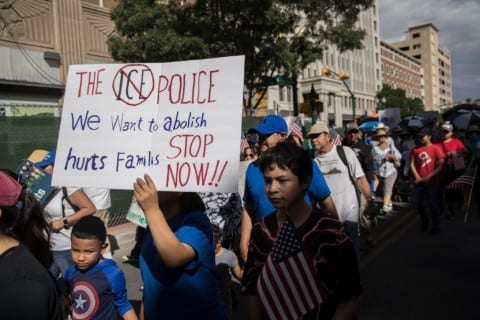 Abolish ICE is a political movement that proposes abolition of the U.S. Immigration and Customs Enforcement.  In 2018, it gained traction based on the controversy of the Trump administration family separation policy.

The Trump administration family separation policy was presented to the public as a “zero tolerance.”  Meaning that all immigrants who are caught are at risk of returning back to the country they are born in.  Chaos all over the country took place throughout the years and has affected many families.

In the article, The Trump Zero Tolerance Policy: A Cruel Approach With Humane and Viable Alternatives, it states “There are clear indications that the administration is still pursuing a family detention option, which could also apply to families that seek asylum at ports of entry.”  Due to this new policy, it has made it more difficult for immigrants to cross the border and make a good living out here in the United States.

Before Trump was president the main goal of ICE was to get rid of immigrants that have committed serious crimes.  Their job is to protect the United States from the cross-border crime and illegal immigration that threaten national security and public safety.  Nowadays, all immigrants are portrayed as criminals all over the media.

Image: “Abolish ICE” has become a rallying cry among protesters and some Democratic candidates and lawmakers. Credit: Victor J. Blue for The New York Times Link

Hi, Melissa I like how you wrote about this movement this can totally spread awareness. Ice is a horrible for stripping and separating people from their families, and leave families living in harsh conditions with no basic needs.

Hi, Melissa I like how you wrote about this movement this can totally spread awareness.

Hi, Melissa. I like what you talked about in your article about abolishing ICE. ICE has been around since 2003, it will be really hard to actually abolish that because they have sent back immigrants for years and those who committed crimes. It’s hard to take something away in a snap of finger. I’m not saying it’s impossible it will just be a longer process due to the fact it’s been around for 17 years. I don’t think ICE should be abolished but should be tweaked. If you really think about it, people coming to the US without papers is illegal enough that there is nothing wrong what ICE is doing. Also all races can be immigrants.