A Young Black Man Was Choked By Police at a Waffle House After Prom — A Cell Phone Video Captured What Happened.

Home A Young Black Man Was Choked By Police at a Waffle House After Prom — A Cell Phone Video Captured What Happened. 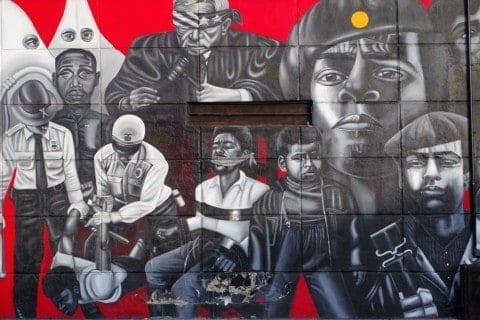 As strange as it may seem, there have been many incidents of police misconduct at Wafflehouses across the East Coast. This specific incident that happened in May of 2018 at a Wafflehouse located in Warsaw, North Carolina was met with shock once video footage of the encounter was brought to light. Sadly, and to no one’s surprise, it’s another case of police brutality toward a black man in America which has become a recurring issue in society. It’s tough for some people to recognize all people, despite skin color, as equals which is what this country was built on so that mentality will forever stray in the air and through the brains of many individuals.

Yet another example of the disgusting racial violence taking place in our country. Asphyxiation and gunshots brutalize our fellow citizens of color. Police violence is the leading cause of death for young black men in America, 1 in 1,000 black men are expected to be killed by police. That’s irredeemable and an atrocity in and of itself. More people need to pay attention because everybody has to be fight this together.

I think your ending comments about the ways in which hatred is so ingrained into American institutions, especially governmental ones like the police, are incredibly powerful. I think recently, with the incidents occurring at our nation’s Capitol this notion of “ingrained hatred” has been solidified, and brought to the public eye in an undeniable way. Conversations about this topic are particularly important in America as our government was founded on the basis of equality, but it is obvious this priority has not been upheld.

I feel disgusted that even in 2020 the American people have to fear for their lives when encountering those who are sworn to protect them.

It’s so sad and unfortunate to know that almost 160 years later, there are still people who grow up being taught these values. That they are somehow more than someone else, and that other are less than them. People will defend them and say it has nothing to do with race, but you can see and feel there’s something wrong with the way they’re acting. If the tables were turned, I feel there would be a totally different outcome. It’s disgusting.

Ronata,
I found this piece extremely compelling. The effects of police brutality and racial injustice continue to affect many black Americans today. Clearly, throughout 2020 we were able to witness the gravity of a racial and social divide that remains present in the United States. And unfortunately, as a black woman, I fall victim to the traumatic effects of racial injustice in our nation. However, my experiences with racial injustice have been limited to remarks made in the school and in the work environment, while other black women have faced far worse examples of injustice, in particular Breonna Taylor. The murder of Breonna Taylor in March 2020 proved the United State’s limited effort in upholding its foundational duties of liberty, justice, and equality. Although many voices have spoken about the injustice our nation exhibits, the extinction of the racial divide may never occur in the United States. I prefer to hope that we can see equality, as you mention, however, I don’t expect to see all Americans, disregarding race, being treated equally within my lifetime.