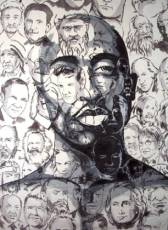 In order to talk about American beliefs and values we must look at all of American history and our own future and take it all into consideration. America was founded and built for the average white man. From the American Dream, to the laws created and treatment of people, white men are continuing to make America a place where only they can succeed. America was built by white males and is still being run by white males who only want to benefit themselves. When America was first formed, it was created on the basis of freedom and equality. It was said that anyone can make it big in America if they work hard enough;  this ideal does not work in our current or past society because of the racism and discrimmination created by white men.

America was founded on the idea of freedom. The first time we saw America talk about this was in 1776 when the Declaration of Independence was created. This was created in order for America to gain freedom from Great Britain during the revolutionary war. The Declaration of Independence states “that all men are created equal, that they are endowed by their creator with certain unalienable rights, that among these are life, liberty and the pursuit of happiness” (Declaration of Independence: A Transcription). In theory, it was a good idea. However, it never worked because only white males were granted these things. When the Declaration of Independence was created, people were still enslaved Innocent black children, women, and men were being used like toys by the white man. On January 1, 1863 the Emancipation Proclamation was issued stating that “all persons held as slaves within any State or designated part of a State, the people whereof shall then be in rebellion against the United States, shall then be, thenceforward, and forever free” (Transcription of the Proclamation). Even though people of color have been free since 1863 they are not truly free because they still face discrimmination and hatred every single day. The effects of slavery are still felt daily by Americans around the world. The only pgroup of people who benefittted from slavery were white men who could use people of color as property.

People across the nation are not receiving the same opportunities as other people of different religions, genders, and races, even though people are all supposed to be equal under the law. In history, there have been many things done to people in order to cut them down and make them feel less of a person. A great example of this is the 3/5ths compromise found in the Constitution. In Article 1, Section 2 of the Constitution it says that people in certain states will be taxed by “adding the whole Number of free Persons, including those bound to Service for a Term of Years, and excluding Indians not taxed, three fifths of all other Persons” (The Constitution of the United States: A Transcription). This is saying that all states will be taxed based on the population of their state. In order to gain a larger population, the southern states used slaves and counted them as only 3/5ths of a person. By doing this, they were allowed to count them as part of the population but they could still not vote. Later on in the American timeline, after slavery was abolished, America was continuing to supress people of color through many different means. One way they did this was using Jim Crow Laws. Jim Crow Laws “forbade African Americans from living in white neighborhoods. Segregation was enforced for public pools, phone booths, hospitals, asylums, jails and residential homes for the elderly and handicapped” (Jim Crow Laws para 14). These laws were another way to diminish people of different races. If America was built on equality and states that all men are created equal, why is America trying so desperately to keep one group of people down? These laws only benefitted white people because white people had freedoms that people of color did not. White Americans have never felt the fear and worry that people of color have felt while living in America. the land of the free.

On August 18, 1920, “The 19th Amendment to the U.S. The Constitution granted American women the right to vote” (19th Amendment para 1). After hundreds of years of protesting and fighting for women’s right to vote, it was finally granted. However, just because women were given the freedom to vote did not mean that they were on equal footing with men. Women were nowhere near being equal with men whether it was at home, in colleges and universities or in the workplace. In our current society, women earn “on average, just 82 cents for every dollar earned by men of all races” (Bleiweis para 3). The wage gap for women of color is significantly bigger coming in at as low as 54 cents for every dollar made by a man. This goes back to the idea of a white man’s world. Women in the year 2020 still are not being paid the same amount of money as men are. How are women supposed to ever succeed how men can when they can’t even make the same amount of money as men?

In order to become the equal and free nation our founding fathers wanted we must work to abolish the inequalities that stem back to the beginning roots of our country. We must provide a fair chance for everyone to seek their own American Dream. If we don’t work to create a more equal world for all, white men will continue to rise above everyone else. We won’t be living in our own worlds, just a white man’s one.