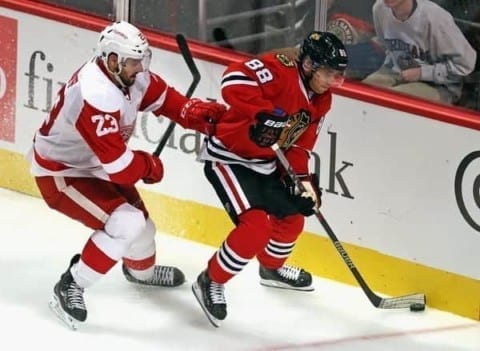 Patrick Kane, the all-star forward for the Chicago Blackhawks had tremendous grit when he allowed himself to get slammed into the boards by the opponent from the Detroit Red Wings to try and help his team maintain puck possession in the offensive zone.

Grit in itself is a very interesting word. To me, there is something about it that holds an intriguing aspect. Words like courage, bravery, and nerve are perfect synonyms to describe the general sense of the meaning of the word. The difference between “grit” and its synonyms is the different connotation that “grit” has.

To me, the word has a sense of willingness to get down and dirty to fulfill the needed task, while having the courage or being brave doesn’t necessarily mean they will stop at nothing to get the job done. Grit also means perseverance, which is obviously not an easy task. To be able to grind out any adversity or challenges that you face, no matter how hard or strenuous the obstacle is to overcome, if you have what it takes, you have grit. The word even sounds nastier and more gruesome than its synonyms.

When the word is finished rolling off of your tongue, you end by showing your teeth, almost in a manner like you are snarling. While the word isn’t bad in itself, it sounds rougher around the edges than a word like courage and bravery.

The word is also very short and to the point. Only four letters make up such a different, expanded meaning of courage and strength. To me, “grit” is a word that is on a whole other level than words with similar meaning.

Griffen,
I really liked the example you used, Patrick Kane is one of the my favorite players in the NHL, he is so deceptive.

Very interesting and almost inspirational! Grit is a fantastic trait to have, and thank you for going deeper into its meaning for me. I’m happy to further understand what grit is.

I really like the example you used to portray the meaning of grit, it really shows what the word is truly about and how it is distinguished from other words like bravery an courage. Although, while they’re are differences, you seemed to identify the positives, while they’re may be some negatives too.