A Question of Choice

Home A Question of Choice 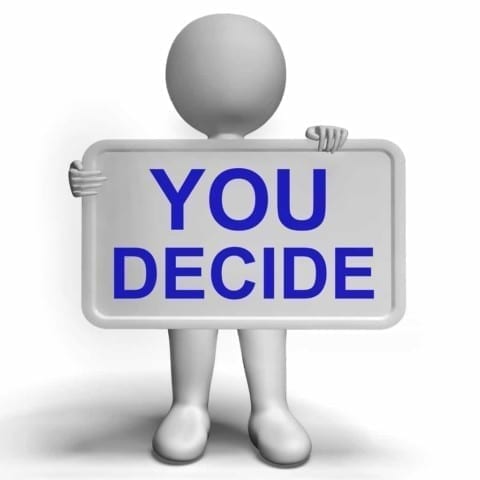 I’m sure you’ve heard someone say, “You decide!” But are you actually making a choice? A choice is something that is decided upon after deliberation between alternatives. In that sense, even computers make choices, but the question is whether or not the choice was free; whether or not people have free will. A computer may choose to display one result over another after a google search, but that was defined very clearly by an algorithm of set laws and boundaries, and every similar search will produce similar results until the algorithm or the data changes. In that sense, it is not free at all, the same way in which a flytrap closes around an unfortunate insect, purely the result of some natural laws being employed in a single specific circumstance. Particles don’t make choices, even on the quantum scale, no scientist has ever displayed a particle with any semblance of choice, only probability: this is where it is likely to go, or unlikely, but it’s going somewhere because of these laws. Religions are mixed on the subject as well. Predestination in Christianity is an example of no, or limited, free will, as well as any example of an omniscient God in religion, but this is countered by the metaphysical argument that knowing all futures simply involves knowing every possible branch in time after every possible choice – thereby leaving the choice intact, and the theological omniscience. As the Catholic Church puts it in their Catechism, “Freedom is the power, rooted in reason and will, to act or not to act, to do this or that, and so to perform deliberate actions on one’s own responsibility. By free will one shapes one’s own life.”

“It was already known that electrical activity builds up in a person’s brain before she, for example, moves her hand; Libet showed that this buildup occurs before the person consciously makes a decision to move. The conscious experience of deciding to act, which we usually associate with free will, appears to be an add-on, a post hoc reconstruction of events that occurs after the brain has already set the act in motion. If moral responsibility depends on faith in our own agency, then as belief in determinism spreads, will we become morally irresponsible? And if we increasingly see belief in free will as a delusion, what will happen to all those institutions that are based on it? It seems that when people stop believing they are free agents, they stop seeing themselves as blameworthy for their actions. Consequently, they act less responsibly and give in to their baser instincts.”

Even if all said above is true, is deliberation free in itself? The capacity to deliberate to such an immense degree is unique to humanity among all (discovered) life forms, and the act of deliberation and choice may well be ‘free enough’, even if choices can be predicted. In other words, simply proving that a prediction based on measured symptoms is true does not mean that what caused those symptoms was any more deterministic than a proper prediction of the movements of a quantum particle. The issue seems to fall on responsibility, the perception that just because your choice can be predicted means you are that much less responsible for it is fallacious. Your decision is your responsibility, even if you were coerced by your own brain into making it. We can also alter a human’s behaviour by cutting off a limb, and change the probabilities of a particle by hitting it with another particle. Humanity may be little more than the most complex computer in the world, but the choices behind them are still as real as they ever have been. Even if they can be predicted.