A person of interest and social safety-Josh Powell Case

Home A person of interest and social safety-Josh Powell Case 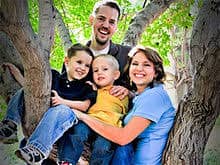 In an article by Amanda Paulson, the question about whether Josh’s sons should have been allowed to visit him is brought up. Josh’s sons, Braden and Charlie, were originally taken out of his custody when police found child pornography owned by his father Steve. Since Josh and the kids were living in Steve’s, social services deamed this household an unfit environment for children. Charlie and then went to live with their maternal grandparents, the Cox’s.

After Charlie and Braden were taken out if Josh’s care, he lost his parental rights. The state said that the only way he could possibly regain custody is if he got his own place that was fit for children to live in. So, Josh rented a small house in a suburban area and started moving all his belongings as soon as possible. Yet, Josh was still not allowed to visit with his kids unless he was at a public meeting place with a social supervisor present. Josh continued to see Charlie and Braden in public until the state started getting complaints about how they were uncontrollable with Josh being in public with his children, so the state granted “private” supervised visits in his new home. The article names this as mistake number one. Why would the kids be even allowed to see Josh when he was the prime person of interest in the disappearance of their own mother.

Another main point that this article made was that on February 4th Josh emailed his attorney “ I’m sorry. Goodbye” eluding to suicidal thoughts and unstable actions. This was the day he was supposed to meet with his two sons in his new home. The state did nothing. The social worker still brought the children over. This was the last time anyone sa them alive. This was the same day that Josh killed his toe kids and himself in a house explosion.

The article also makes a point to let the readers know that  judges are training social workers on safety issues “to encourage them to seriously assess risk factors” by using a “lethality assessment” scale when deciding custody and visitation.