Observations on Billboard – “TEXT AND DRIVE” 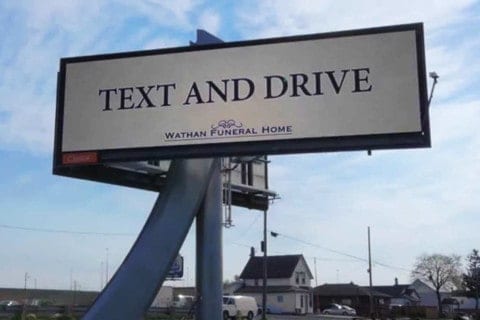 My instant reaction was the big bold words, “TEXT AND DRIVE”. What I thought was that this billboard is sending the message that it is okay to do both things at the same time. And then I thought of this one show that I seen a while back which was, “Extreme Makeover Home Edition”, and it was an episode of a family who lost their child due to texting while driving. The family then started up an organization where they wanted to send the message that it was not okay to text and drive and they wanted to send the message to the world so that no one could ever have to go through what they been through and lose a loved one over this. I thought that that was a beneficial organization and I agree with it because one simple text and cause you your life. But back to the billboard, I then realize the bottle half of the sign and it shown a name of a funeral home. So then I thought of death and was wondering what it could mean. I just made up a scenario in my head and thought that maybe the funeral home could mean death so text and drive could lead to death. It was just my thoughts on the billboard and its message.