Observations on Billboard – “ENGLISH IS OUR LANGUAGE NO EXCETIONS”

Home Observations on Billboard – “ENGLISH IS OUR LANGUAGE NO EXCETIONS” 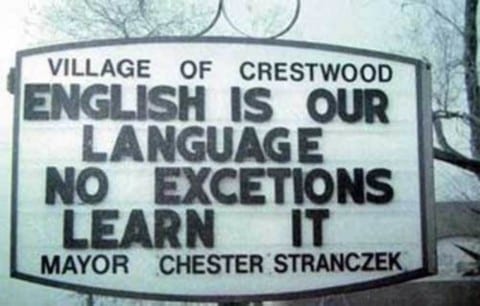 But then my second thought was that maybe it’s not targeting the immigrants because, by the looks of it, the billboard may not be from The U.s. It can be from a different country that is foreign or has a different language they speak. So maybe the billboard can send the message that the people living in that country need to learn English.

Because English is the top language that you can use to get around the world. It is an important language to learn and speak because the majority of the people in this world speak English. So by using this billboard, it tells the people that learning English is what gets you places. And then my last thought on this billboard was that by saying, “ENGLISH IS OUR LANGUAGE,” it is trying to say that the English language belongs to them. All of this assumes that English is the language that this country or island or whatever the billboard is taken place was their language first.