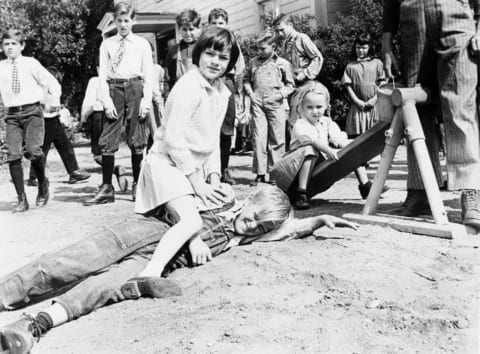 I am still reading a book called To Kill a Mockingbird: A Screenplay, by Horton Foote, and I also started reading Harper Lee’s novel. So far the book has been great and i love it. It keeps on getting better and better. This book can relate to us humans in many different ways. I say this because they are dealing with racism and poverty and so much more. I am

most definitely excited and thrilled to see what happens next

The second part of To Kill a Mockingbird might leave a reader feeling terrified. I say this because, when Scout and Jem joined their father, Atticus to meet with Tom Robinson’s wife, they stayed in the car. Later on Mr. Ewell was looking at them through the car drunk, and that is pretty much a frightening scene.  According to the play Atticus tells Jem “no need to be afraid of him son, he’s all bluff.” This happens when Mr. Ewell was drunk and was staring into the car , then atticus comes out. Later on Mr. Ewell calls him a “nigger lover”. This is such a horrendous, terrifying scene.

We learn something interesting about Scout on page 27-28 of Harper Lee’s book where it says “Miss Caroline picked up her ruler, gave me half a dozen quick little pats, then told me to stand in the corner.” This quote shows that Scout really doesn’t take things well. This is typical of how the character acts in the book so far. She oftens seems to be getting into lots of fights so far with her classmates for quite various reasons. I think a reader would love to be Scout’s friend, yeah she does get in trouble and don’t know how to handle things but she looks very fun and cool.

After this part of the book, most readers probably will be looking forward to the next section because we still want to know more about Tom Robinson’s case and what happens. I think what’s  going to happen is they will start seeing who is innocent.

Hey Fatoumata, I’ve read this part of your story about ‘to Kill A Mockingbird”. This was a very interesting part to read. You’ve talked about how Mr. Ewell was very creepy and how Atticus’s children were scared of him. Also you’ve talked about how racism occurred in the play. I would love to read the next part of the story. Also i would love to show other people about it so they can be entertained. Reading this made me feel anxious about reading the next part.