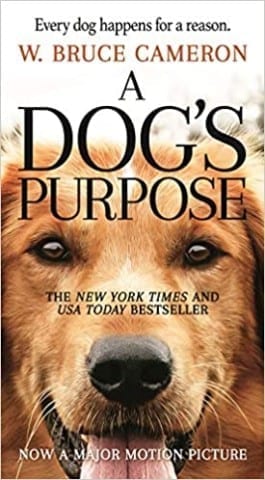 The protagonist is playing the story of a dog who goes through four reincarnations, and comes back every time as a different hound. He is seeking “a dog’s purpose in life” each time he has been resurrected and “given another chance”.

At the beginning of the book, he is the archetypal “pawn”. This can be seen in the earlier pages, towards the beginning, where the author writes:

“A few weeks later, after being nursed by their mother, a feral as well, the dog and his siblings Fast, Sister, and Hungry go outside of their den to explore the woods around them. Soon after, men come and capture them.

Not long after, animal control agents arrive with orders to shut down the place, the men brought Toby too, due to poor sanitation and welfare conditions. Many dogs, including Toby, are subsequently euthanized.”

But by chapter 5, Toby has begun to transform into the archetypal “survivor/hustler”. When he is reincarnated as a new dog, and is set to live in a new environment. For example, “Toby is reincarnated as a Golden Retriever puppy. A few weeks after birth, when Toby and his new brothers and sisters have matured enough, he and the others are allowed to play outside the cage. Toby climbs up onto a table and bites the doorknob, opening the gate to the outside world and leaving him to explore. A truck driver picks up Toby on the road and drives to a bar. After the man has been gone for several hours, Toby begins suffering from heat exhaustion in the truck.

However, a woman appears and breaks the car window. She revives Toby with water from a water bottle. The woman brings him to her car and returns home. The woman introduces Toby, renamed Bailey, to her eight-year-old son, Ethan, who is overjoyed to have a puppy of his own.

Over the course of many years, Bailey lives a full life with Ethan. He accompanies Ethan through many difficulties, including arson, causing a permanently injured leg, ending Ethan’s athletic career. Ethan goes to live with his grandparents at their farm in Michigan so he can be with his girlfriend Hannah and finish his senior year in high school. Around that time, things are not going well in the family, with Ethan’s injury, an eventual breakup with Hannah, and a divorce between Ethan’s parents.

Soon after moving, Ethan goes off to college, leaving Bailey with infrequent visits from him during the holidays. Bailey’s health starts to decline, with him taking naps very often and being weak. Soon, Ethan’s mother and grandparents take him to the vet, where he is once again put down.”

Toby, renamed Bailey, is no longer the dog he used to be. So far he’s lived 2 different lives. And continues to live more.

A reader might predict that the turning point for Bailey comes when He is once again reincarnated. But what comes after? With only one adventure left. The middle/ending of this book encourages this prediction>: “Bailey wakes up once again as a German Shepherd. Bailey, who realizes that he is now a girl, is picked out and named Ellie by a police officer, named Jakob, and trained to be a search-and-rescue dog. But as years pass he dies of old age,

He is reborn once more but this time as a Labrador Retriever with Wendi, his new owner, who is ecstatic with Bailey, whom she renames Bear. However, she is unable to keep him because of a no-pet rule in her apartment building. Instead, she gives him to her mother, who is dating an alcoholic. The mother’s boyfriend, fed up with the dog upon receiving a notice that he needs to provide better living conditions, ditches him on a country road. Bear recognizes his surroundings, having been there before with Ethan. Using the skills he learned as Ellie, Bear is able to trail the scent of one of the farm’s animals to the Farm, where Ethan lives. Ethan, now an elderly man, decides to keep Bear, who he renames Buddy, and marries Hannah.

Years pass, and Ethan suffers from an apparent stroke, and as he is dying suddenly recognizes that Buddy is Bailey.”