A Decision that Changed my Life

Home A Decision that Changed my Life 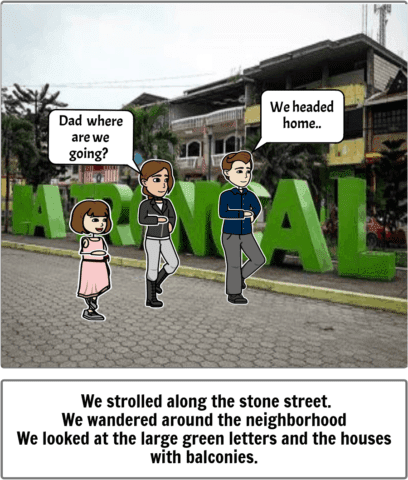 It was early in the morning, and my dad, my sister and I were walking down the stone streets of Troncal, a city center with very beautiful trees, clothing stores, restaurants, houses with balconies, and there is a monument of the great green letters that said “La Troncal.”

My dad suggested, “I have to tell you something when we get home later tonight.”

My sister and I were left in doubt and waiting all day to know. We went to the park, had lunch and finally it was night and we were walking back to my house. My house was yellow and orange and had a balcony. When we got home, my dad made my sister and I sit in the living room of the house.

He started smiling and exclaimed, “We’re going to live in the United States.”

I asked, “Why, what is the reason for moving to the United States?”  While my father was talking, I became very confused.

He suggested, “All I want is for you and your little sister to have a good education and a good future.” I understood his reasons, but I didn’t want to be separated from my family.

When I was on my way home to talk to my mother about it, the landscape of the streets was beautiful although it was already a little late. While I was walking, I saw the houses, the trees, and the cars that passed through the street. After five minutes, I arrived at my mother’s house, and I told her everything my father had told me.  I asked for her opinion on the subject. She told me that she already knew from the beginning that my father would take us to live in the United States.

She suggested, “Kerly, it’s a great opportunity for you and your sister because you will have a better future and learn a new language.” I was getting more confused, but my mother convinced me to travel with my father and my sister.

One day before going to the airport, I hugged my mother and my two  grandmothers very strongly, and they gave me advice like “You must be obedient and study hard to have a better life.” I replied that I would follow all the advice they gave me. In the morning we arrived at Guayaquil airport and my sister and I had to say goodbye to the whole family, we were all crying and I felt very bad. But I thank God because now I have the opportunity to learn a new language.

When I think about that moment, many memories come to mind, like the last time I hugged my family. Since that day I promised myself to continue studying to have a good future and make my whole family proud. Some people think that coming to the United States and studying in this country is easy, but the reality is that it is very difficult and requires a lot of effort and dedication to reach your goals. I continue to maintain that my family will always be there for me and that they will always support me in everything I decide, even if we are separate.

Your story is so amazing, I can’t believe how hard it would be to leave everything behind but you are proof that it is possible to succeed in a new place. I love how you could either read your story like normal or see it through the views of a comic. I bet it took a lot of time and it makes your story so multidimensional to a reader. I’d love to see more animations from you!