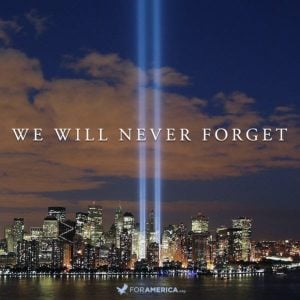 In the article “Remembering 9/11, Twenty Years Later”(McGraw). I learned that that morning fourteen members of the terrorist group al-Qaeda hijacked four passenger jets. In result created a horrific event that would scar United States of America. The terrorists on purpose crashed a plane crashed into the Pentagon in Washington, D.C. Also crashed two of the planes into the twin towers of the World Trade Center in New York City causing the buildings to collapse. On the fourth plane, passengers fought back. They diverted the plane from its Washington, D.C., destination and caused the plane to crash in a field in Pennsylvania. These attacks lead many people to their deaths in results in over 3,000 deaths. These events led the Bush administration to begin the War on Terror in Iraq and Afghanistan.

What are your thoughts on the September 11 attack?
0
Please leave a feedback on thisx

I think with what happened with September 11 attack was a crisis. Those who planned and implemented the horrendous attacks of 9/11 could not have imagined all the ways that their attempt to sow chaos would change the world. Nor could the leaders and policymakers who reacted to the events of that horrible day. Both were out to change the world. And they did. But not always in the ways they intended to or imagined. Such are the ways of history.The events of 9/11 not only reshaped the global response to terrorism, but raised new and troubling questions about security, privacy, and treatment of prisoners. It reshaped US immigration policies and led to a surge in discrimination, racial profiling, and hate crimes.

James, great post discussing the events that occured on September 11th, 2001. The aftermath of the attack completely reshaped the way the United States dealt with foreign relations in the Middle East. Can you think of some of the ways the U.S. was changed and how it still affects us today?