What Does Being American Mean?

Home What Does Being American Mean? 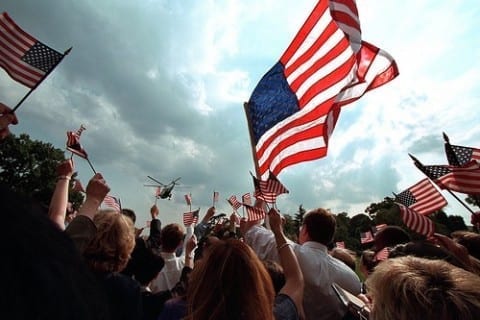 I think that the belief of the morals of the American creed would be that with hard work and diligence, it is possible to make a future of yourself and change your fate for better. In the essay “Superman and Me”, Sherman Alexie expresses that while he does enjoy reading, it is in fact also the gateway to making a better life for himself, even going to the extent of saying that his love “had only one purpose. I was trying to save my life” (Alexie 3). By using such extremes for explaining his need to change his lifestyle, it shows that Americans value determination to make a better life for themselves, and that if they put their mind to it, nothing can stop them.

Another common theme in American values is that the outside world is harsh and cruel. In the book “Masks” by Lucy Grealy, she addresses being bullied by a group of boys everyday for her facial disfigurement, and compares herself at the lunchroom as “a sitting duck” (Grealy). Such extremes could only be used to explain that the outside world of bullies is so cruel that she has no hope in even trying to retaliate. Of course, by believing in yourself and following your passion, it only makes the “American Dream” of making something out of nothing more worthwhile if you’re challenged in all aspects.

Lastly, American culture expresses a way of life and standard that is ever changing. From the morals of our founding fathers to those of today, it is evident that in a mere 300 years we have come that change our culture, believes and values over time. This could be shown in the poem “Let America be America Again” by Langston Hughes, it expresses that while during the time of Hughes, life as an African American didn’t represent the American dream that the founding fathers had promised, he is still confident that in the future, the United States will change for the better and he could appreciate American values like those promised when the country was first founded (Hughes).

In conclusion, the American creed is wide and diverse but what in common that ties the ideas together is that Americans like to make their own future, and it is only possible because American culture is ever changing.