Immigration: A Need in America

Home Immigration: A Need in America 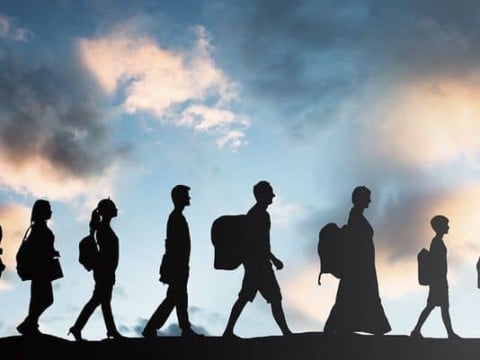 Recently I covered the topic of immigration on a Youth Voices post. I had written about how it has turned into a true American value. It is not only a value, but it has become a part of our culture. However, this topic often gets ignored. Immigration has evolved into a natural part in our society and has turned into an underrated topic. For instance, President Donald Trump just authorized the separation of immigrant families. There was no commotion or no protest to combat this issue after news broke out, which made me concerned. Do Americans care more about injustice than the well being of others? Luckily I stumbled upon The American Dream by Ibi Zoboi, which reassured my stance to be for immigration and had inspired me to research more on the impact immigration has on American society. Immigrants must acquire an education, in order to thrive with opportunities in our society.

When immigrants move to the United States, they start on an empty platform. You might be thinking, how does that impact society? You might automatically thought of things like “the government has to help finance them,” or “immigrants has to find jobs for themselves.” That is why the role of education is important and is given to immigrants. The American Street by Ibi Zoboi replicates this importance well. Zoboi uses immigrant, Fabiola Toussaint, for her main character. The story starts off when Fabiola finds out that her mother was unable to arrive to America. This causes Fabiola to miss her often especially when enduring hardships from her cousins. But instead of sorrowfully waiting for mother, Fabiola takes the courage to chase her American Dream by getting her education. In one part of the book, she writes,“ If my cousins are royalty here, then I am just a peasant who only wants a good education, opportunity for a good future, and my mother. This is what she hopes for me too” (Zoboi 53). This shows the comfort that education gives to Fabiola. She is still getting used to her new surroundings, going from Haiti to Detroit, Michigan. She was going into a life that was already very structured and not easy to fit into. Despite all the chaos, Fabiola kept going and used education to become an efficient member in society.

From here, I deeply researched on what education means to immigrants and how they plan to impact the world. Planning to become an American is one thing, but more factors indicate toward a desire for a better future. According to Stapha Charleme, she described that, “A higher level of education often results in a better future. But for an immigrant, education is a tool that is difficult to obtain because of a language barrier and, sometimes, poverty” (Charleme, para 1). By saying this, immigrants are willing to overcome language barriers just for future generations. But to make that possible, education must be provided. It is a common trait that most people have and are willing to take. People are able to learn things through an education and it creates a continuous reliance to thrive in our society.

Education is not always a given option. It has created the lack of opportunities for immigrants. The lack of an education does not justify the amount of impact immigrants are capable of. According to The Balance, Kimberly Amadeo mentions that, “Immigrants are less educated than the average American. But that’s improving. For example, thirty percent of immigrants, 25 and older, lack a high school diploma compared to 10 percent of native-born adults. But that’s better than in 1970 when more than half of immigrants lacked a high school diploma” (Amadeo, para 3).  This data shows a slowly increasing recognition on given opportunities. Americans are slowly recognizing the impact that could be given, but are not quick enough as families, under Trump’s presidency, are being separated. Our society will not be efficient if we Americans don’t bring education and determination to our immigrants. We are already have immigrants slowly moving away, not having any opportunity.

Education might not seem like a big deal but that is what immigrants rely off of. It provides opportunity. If we don’t have opportunities, we can’t thrive in our society. There would be no impact that could be given or shared.

Amadeo, Kimberly. Immigration’s Effect on the Economy and You, 28 September 2018, The Balance. www.thebalance.com/how-immigration-impacts-the-economy-4125413. Accessed 26 October 2018.

I liked most of the points you were making. Immigration is a scary thing most of my family being immigrants could agree that it is not easy going from their native country mexico to America this mainly being because of the language barrier making it harder for them to take advantage of any job opportunities that require them to be able to fluently speak english and causing them to get a low class job. This being a factor you might ask why did they migrate then it was because of the benefits of living in america such as the health care system and other opportunities such as education for their children so the adult immigrant population may not have the best benefits but putting that aside they tend to migrate to allow their children the opportunity to have more later in life. This being one of the many benefits of immigrant migration that is highlighted in an article by edgar cohen whose opinion on the matter you might find interesting:
https://www.haasjr.org/perspectives/voices-from-the-field/eric-cohen?gclid=Cj0KCQjwguDeBRDCARIsAGxuU8Y4p23xZ0EtiSaGwpGT4pnjUNougQpOSKm-z5nTa-DxMq–AKcB9HgaAmYlEALw_wcB

You make some really good points, but I have some experience in this area. My parents are both immigrants, and I’m the first generation American in my whole family. My parents moved to the U.S. from India, and have lived here for nearly 20 years. Throughout the years they say they’ve noticed a lot of change in the country. Earlier, 20 years ago, it was difficult to find people from other countries. Especially those from India. But now you see immigrants everywhere and Indians a few times a day. They say they’ve noticed a huge cultural change and political view on immigrants since they got here. They talk about how immigrants bring in aid for the economy by filling things up like American jobs. And also spreading different beliefs and cultures across the nation. If suddenly immigrants weren’t allowed or just disappeared in the country. We would automatically take a toll to our economy because many immigrants supply it. We would also lose our diversity which is extremely important int this day and age. Bottomline is immigrants are important, and more are coming to help shape our country, but to make it much better. After all, every American has great grandpas or grandmas who were immigrants. Therefore nearly the whole population of the nation are all decenedtns of immigrants from Asia, Europe, and other parts of the world.