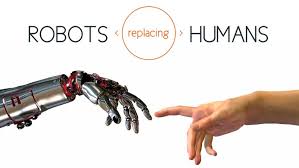 Hi, my name is Imani and I am a sophomore at Oakland Unity High. In my English 10 class, we’ve recently discussed the topic of  Artificial Intelligence which is also known as robots. As a class, we have looked at different texts and videos relating to whether robots are either dangerous or beneficial to society. These sources brought me to the conclusion that robots will be able to advance by themselves for the greater good or for evil wrongdoings. So, in my irrelevant opinion, I believe that it is more in-between. As you all may know, technology is constantly advancing and updating as the years go by. For example, new Apple and Samsung products come out nearly every single year. So, is the possibility of robots being able to improve themselves really so far-fetched? Some students believe that robots will destroy all of humanity because they know too much. However, others believe that robots will advance enough to learn what feelings are and will be able to have emotions and feelings for their own.

I believe that robots will be able to advance by themselves but, I also believe that there will be some robots who will know right from wrong and others will simply not. These robots who have these morals will be loyal while others who are amoral will lead an uprising which will ultimately lead to the enslavement of the human race. I think these loyal robots are helpful when it comes to doing jobs and task that might be overall too dangerous or do jobs that humans simply do not want to do. In the article, “Better Than Human: Why Robots Will – And Must – Take Our Jobs” by Kevin Kelly, it states that if the humans try to beat robots it will ultimately end with the human race getting put out of a job altogether so they will work alongside them so they can still have money coming in. This means that humans can still have a job but they can also do jobs that they have a bigger interest in. For example, something in the art or music industry which robots will most likely not be used for. Instead, robots will be used for technical jobs which requires a type of intelligence and skill set which may be beyond humans. This can be overall beneficial for humans since they won’t have to do pesky and annoying tasks and they will be able to do tasks that they actually might want to do which robots most likely can’t do.

In this Artificial Intelligence future, there will have to be rules and guidelines to keep the robots in line at all times. Even a minor casualty can result in the robots causing an uprising. For example, in the movie I, Robot there was a supercomputer named VICKI who found an opening in the rules which she used in her own advantages to take over the world. VICKI had eyes and ears everywhere and had full control over the other robots. But one thing that really caught me was how you could speak to her. She acted like Alexa which is an Amazon product that you can speak to and give orders which it follows. Like Alexa, VICKI can connect to a building which people can talk to and end up trusting in the progress. This may seem harmless but VICKI can collect and overhear vital information which can be used against the human race in order for robots like her to take over the world completely. In order for us to stop this, we have to watch how we are programming these robots so they cannot find a loophole in the rules made to keep the robots in check at all times. Honestly, robots can be either loyal or be distrusting depending on how we make these rules and how we make them.