How Police Brutality Affects People of Color in Oakland

Home How Police Brutality Affects People of Color in Oakland 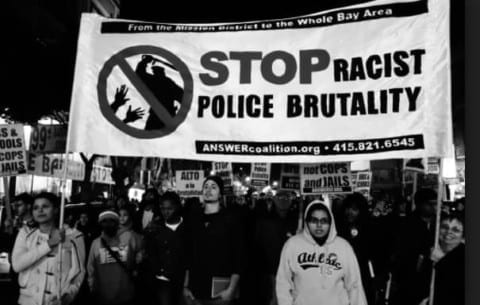 Why is police brutality common in Oakland? In the article, Oakland police: controversial history sets tone for city’ discord. Harris states, “White people account for only 16% of OPD vehicle stops, and 6.7% of motorists searched. Black people in Oakland, by contrast, account for a whopping 48% of vehicle stops, and 65.8% of motorists searched” (Harris). Police brutality can lead to violence and death but is there any way for police to stop targeting People of Color the most?

To begin, police brutality is a problem in Oakland because many police officers target mostly all People of Color because of stereotypes and there is no process to discipline police officers who act wrong. In the article “Street Stories in Oakland”  by Stacy Johnson. Johnson points out, “Police brutality in Oakland, California is a reality that goes unaddressed far too often…Oakland’s process for disciplining police officers accused of wrongdoing is a broken and inadequate system that has evaded the public’s scrutiny for too long” (Johnson). This shows that police overuse their power by going too far and doing something wrong. Also, it points out that if police assumes a Person of Color is pulling out a gun they will pull the trigger and end up killing someone who could be innocent. But People of Color might be trying to show that they are unarmed. Lastly, police are stereotyping People of Color by assuming that they are dangerous. This article is trustworthy because it had a lot of statistics about how many People of Color police have killed. This shows that police brutality is a problem in Oakland because police underestimate people and just end up killing them. Furthermore I interviewed Angel Calmo who lived in Oakland for about 16 years he explains, “Police go way too far because they think their in control of society and we as People of Color and taxpayers we pay them to protect the community and serve the country with respect but police are not doing any of that instead killing people who didn’t do anything wrong”(Calmo). This clarifies that People of Color who live in Oakland pay their taxes to give police an opportunity to do their job and do what they are supposed to be doing correctly but they go too far. This statement is trustworthy because Calmo has experienced and seen things that police have been doing wrong generation by generations. Additionally in the article “Law Enforcement killed 90 Oakland Residents Since 2000, And 74 percent were black” by Alex Barreira and Arielle Swedback they wrote, “These deadly encounters were just three of the 90 officer-involved killings of Oakland residents since 2000…The most alarming discovery: 74 percent of Oakland residents killed by law enforcement between 2000 and 2016 were Black men and women” (Barreira and Swedback). This explains that when police encounter People of Color, police  are more likely to hurt or kill People of Color. This shows that throughout the years there are more People of Color in Oakland being targeted by police and the number has been increasing. Lastly, this point out that police are stereotyping People of Color since it is 74 percent of black women and men that had been stopped by the color of their skin. This source is trustworthy because it had a lot of information about what was happening in Oakland and many statistics showing the rate of how many people of color have been killed. Moreover, I also interviewed Silvia Mendoza about why do do other people think People of Color are targeted by the police she states, “Police think that they are immigrants and take them away from this country and well this is  one of many problems in Oakland and police focus more on other things that don’t matter like sideshows than worrying about killing innocent People of Color” (Mendoza). This shows that when police have to deal with a certain job they focus mainly on something that isn’t that much of a “big” problem such as sideshowsy instead of worrying about who they just shot and if they were even unarmed. This also shows that police aren’t being taught what is wrong and right in situations when they have done something

Others may say that police are doing a great job for this city in the article “Stanford big data study finds racial disparities in Oakland, Calif., police behavior, offers solutions” by Stanford University they explained how they are finding more and more data from police and what they could improve they wrote, “Police agencies are guided by the commitment to serve communities with fairness, respect and honor” (Stanford University). In other words this quote means that some people think that police are doing what they are supposed to be doing and are following the rules they are supposed to follow. This source is trustworthy because it was posted in 2016 which was posted recently. Also because they weren’t being biased about they were talking about.

In conclusion, I believe police brutality is a problem in Oakland because most police don’t worry about what is important and target mostly People of Color in most situations they are in. Also police are not being trained to do what they are supposed to be doing correctly and are stereotyping People of Color by assuming they are armed.

Swedback, Alex Barreira and Arielle. “Law Enforcement Killed 90 Oakland Residents Since 2000, And 74 Percent Were Black.” East Bay Express, East Bay Express, 9 Jan. 2018, www.eastbayexpress.com/Oakland/law-enforcement-killed-90-Oakland-residents-since-2000-and-74-percent-were-black/Content?oid=4940357. This article talked about who were the people who got killed by the police and it talk about the most police have been killed are black men and woman. Also it was published recently so there probably are data from now.

I interviewed Angel Calmo about police brutality because he had a lot to say about the topic and had some experience with the police but not that much negative. Also because he has been living in Oakland almost his whole life and probably has seen or heard of someone who got killed by police and are innocent.

Johnson, Stacy. “Oakland Under Arrest: Policing the Police – A Brief History of the Oakland Police Department.” Street Stories: Oakland, www.streetstoriesOakland.com/items/show/40. This article talks about how there has been many arrests in Oakland and how its gone too far. This source is trustworthy because it had a lot of information about police brutality happening around Oakland.

I interviewed SIlvia Mendoza because she is very against police brutality and hates that police only target people of color. Also because she wanted to address what the community does for the police to be in Oakland but are not doing their job. Silvia is trustworthy because she has been living here almost her whole life and had very explicit information about police brutality.

This article talked about both sides how police brutality is bad for Oakland and are trying to find ways they can fix police brutality. Also it talks about what other think other than being against police brutality. This source is trustworthy because it is not being biased throughout the source also it was uploaded recently.

I am so happy about your post, “How Police Brutality Affects People of Color in Oakland,” because of how open-minded you are about this topic. You provided a great amount of facts and events that happened in Oakland. Police Brutality truly affects people of color and has to be stopped.
One sentence you wrote that stands out for me is: “This also shows that police aren’t being taught what is wrong and right in situations when they have done something” I think this is so true because a lot of people, especially cops, have a difficulty in admitting they’re wrong or if they did something worthy of a punishment.
Another sentence that stuck out to me was: “…because most police don’t worry about what is important and target mostly people of color in most situations they are in..” This stood out for me because I find this quote crucial to most of the brutal incidents caused by the police. If more police cared more about people of color, more people could have survived and more people could have had a better opinion on the police and their actions.
Thanks for your writing. I look forward to seeing what you write next because I study and write about police brutality and racism a topic too! Feel free to check out my blog at https://wordpress.com/view/racialprofiling95.home.blog !