Immigration is the American way

Home Immigration is the American way 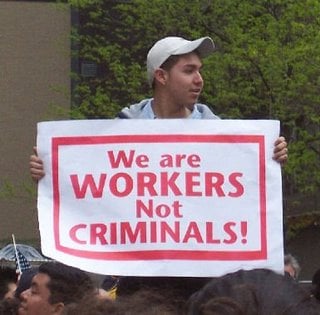 Last month a policy in which protected 800,000 immigrants came to an end. This policy was DACA ( Deferred Action for Childhood Arrivals), 91%of those immigrants were employed. My name is Luis Martinez, my issue is unfair treatment towards Latino immigrants. The ones affected in my issue are Latino immigrants because they are being discriminated. The government holds the power in this issue because they determine who stays in the country. Privilege doesn’t show up in my issue because immigrants don’t get the same education or job opportunities as people in the country.

A website titled, Racial Identity and Racial Treatment of Mexican Americans  the websites explains how Mexican-Americans with high educational levels suffer from more discrimination and stereotypes than those with lower educational levels due to their interactions with whites. An academic source titled Perspectives of Work among Mexican Immigrants demonstrates how Latinos are the largest racial minority group in the U.S. There are 10 million Latino immigrants living and working in the U.S. Latinos migrate from their countries to seek more financial and educational opportunities for their families, because in their own country the opportunities are too limited. A news article titled  Gina Rodriguez’s new ‘Dreamers’ series hopes to rid America of the term ‘illegal’ debates about Immigrant kids that were brought into the country illegally don’t have the education opportunities. DACA  (Deferred Action for Childhood Arrivals) was removed recently. A film audio video titled Activists Question Treatment of Undocumented Immigrants shows how Latino youth entering the Mexico-USA border are forced to sign a contract that helps border patrol to rush their process of deportation. A young boy was being pushed to sign something, the boy refused because he didn’t know what he was signing. Border patrol officer insisted him to just sign.

I would love it if you can take the time to review my process journal, I am open to any feedback. Help me improve!

Hi Luis! I enjoyed reading this because I come from a very different background. I was born in America to a white family and have never had to be discriminated against. I agree that the government should allow immigrants to come over. It isn’t an immigrants fault that they were born in a country without the same opportunities that the United States has. For the people that want to come over, they are trying to better their own lives, so who are we to stop them? The only reason I would understand why the US would support this is because we are already very over populated and are going to continue to increase in size. Personally, people that I have known that have immigrated over have worked harder than some of the American born citizens I know. There are people here that are lazy and feel as if they don’t have to do anything. Look at all of our homeless population. They aren’t trying to find work. On the other hand, people that have come to the US work hard to get a job even if it is low paying. I always see Latinos working so much harder and I really admire this. I hope one day you will have the same equal opportunities that you deserve. Thank you for sharing this with me.

Luis, I like your piece because it is relevant to what is happening today. I agree with you that there is discrimination all around us. I think it is unfortunate that people are discriminated against and treated poorly because of their race and where they are from. Hopefully this changes and people realize that we are all people and we can get past our differences.

Hi Luis,
I agree with you, there is a lot of discrimination against immigrants. It is interesting because America is a country of immigrants, almost everyone has ancestors that came from somewhere else. Everyone deserves a chance at a better life, no matter what they look like. I recently read “Romantic Violence” by Christian Picciolini and he was a skinhead in Chicago. He disliked blacks and immigrants because he thought that they were disrupting the american way of life, bringing crime and drugs, and forcing their culture onto others. America is a melting pot, a soup of all different cultures. Immigrants just want a chance at a good life, not to take over.

Hi Luis , My name is Ethan and Iam from Judge Memorial Catholic High School. Your article was amazing, the rhythm of everything was smooth. I loved how you included statistics in your beginning paragraph, but maybe next time write a more inviting or content informational paragraph. The rest of your article was great, my last critique is to explain why this is all happening to get your audience more informed. Great job !

Luis, your story and further research had such an impact on me, and though I can’t directly relate or even begin to understand what you may be going through right now, I thought a response from a white American citizen might be interesting and possibly helpful. I absolutely agree with your statements, and sympathize with the difficulties of being a DACA recipient in today’s day and age. One statement you made that struck me as very surprising was the fact that Latinos with higher levels of education are more likely to be discriminated against than those with lower levels because of their more frequent contact with white citizens. Any discrimination is horrific, and to think that Latinos who are just as educated, if not more, are being criticized and discriminated against solely because of the color of their skin or the country they’re from is appalling. I hope everything for you and your loved ones is safe and turns out well. I think this source (http://www.npr.org/2017/09/29/554073453/democrats-try-to-force-dream-act-vote-as-gop-rolls-out-conservative-daca-fix) can maybe help you with acknowledging both sides of the argument.

luis, I really like your topic ¨Immigration is the America way¨, because not a lot of people write about immigrants. one sentence you wrote that stand out for me is ¨ I am a Latino immigrants who came into the country 15 years ago with my parents in search for a better future.¨ I think this is strong because I know a lot of my friends are immigrant who came to search for a better life. this post remind of my family because they also came to the United State to look for a better life for them and for me.

I am encouraged by your letter “Immigration is the American Way” because it is a clear and accurate view on immigration. Most people usually see themselves as always correct but those people always forget the perspective of others. This letter is a perfect example of a different perspective that gets shrugged off.

One sentence you wrote that stands out for me is: “Unfair treatment towards Latino immigrants is an issue that motivates me is because I am part of that group” I think this is inspirational because you have the ability to recognized that you are treating unfairly and that you have the ability to speak up about it. Most people would keep what their ideas and do not share.

Another sentence that I liked was: “I look forward to see how Latinos are being treated in different parts of the U.S..” This stood out for me because it is interesting that you are willing to research about others. Typically people research locally but it’s nice to see that the stats and info will be expanded.

Your image reminds me of something that happened to me. One time, my school had a walk-out involving immigration/deportation. The entire school walked out and marched to meet up with others schools. I participated by marching with them and it was interesting to see the importance of speaking out.
.
Thanks for your writing. I look forward to seeing what you write next because I enjoy writing the flow of the information and the syntax. It was easy to understand but it was factual at the same time.

Dear Luis:
I am moved by your,self reflection Immigration is the American Way because I agree with your perspective on how many people treat immigrants differently and how they don’t get the same opportunities as other people.
One sentence you wrote that stands out for me is: “Unfair treatment towards Latino immigrants is an issue that motivates me is because I am part of that group.” I think this is inspirational because having a motive for doing a project shows that you are really gonna put your heart into your research to make it excellent.
Another sentence that I enjoyed was: “immigrants don’t get the same education or job opportunities as people in the country.” This stood out for me because it really shows us the unfair treatment that is occurring.
Your self-reflection reminds me of something that happened to me.I too am a Mexican and although I am not an immigrant I know the struggle that many people face on their way to the United States that is why I can emphasize with what you wrote.Thanks for your writing. I look forward to seeing what you write next because your topic is very relevant to today’s society.

Luis, I really like your post because it’s an issue that is happening right and it really affects us especially the people of different countries. I think this problem needs to be solved because we cannot let the president to change something that affects the people. What are they going to do if they are deported, they do not even know the places where they are going to be deported. I like your issue and I like the image that you chose.

Dear luis:
I am fascinated on your <post, “Immigration is the American way,” because not a lot of people want to talk about immigration and you want to stand up for them.One sentence you wrote that stands out for me is: “ I am a Latino immigrants who came into the country 15 years ago with my parents in search for a better future.” I think this is very strong because many people come to the us to have a better future and you are one of them and it’s nice to see this from a person who is an immigrant.
Another sentence that I liked was: “ Last month a policy in which protected 800,000 immigrants came to an end.” This stood out for me because it didn’t affect only latino immigrant but all kinds of immigrants.
Your post reminds me of something that happened to me. One time when i was treated differently because of my race Thanks for your writing. I look forward to seeing what you write next because is whether you solve the problem.

Luis, I see what you are saying. I totally agree that the government is discriminatory towards Latinos that are immigrants. Also it is true that Latinos and other races in this country, don’t have the same opportunities to achieve goals that they want to. I really liked your article.