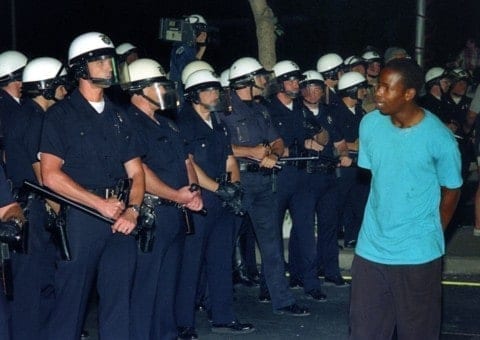 Innocent people that were once part of communites of color , low income and immigrants were killed and little to no justice has been served. Andy Lopez, Michael Brown, Oscar Grant are just  some of many other victims that were also killed or mistreated by the police, and their only crime was the color of their skin or their social status . It appears that  police officers are more likely to target those who have less power and no voice to speak up. For example police officers are oppressing those communites because since immigrants fear to get deported the mistreatment towards them and the oppression from the police continues to go unknown. When a case actually gets reported the police justify themselves by saying they felt threatened by the suspect and they were only following their  protocol . Police officers have inflicted oppression upon the communities of color, low income and immigrants and in order to stop it there should be mandatory body cameras, third party investigations and getting communities to know their rights.

The oppression of communities of color, low income and immigrants has continued over the the last 50 years. Groups like the  Black Panthers who started of in the 1960s to stop police brutality speak up and say nothing has changed. The only thing that has changed is the increase of hate and distrust, from the low income, communities of color and immigrants towards the police. Immigrant fear calling the police or interacting with them  because they fear that the police would turn them over to ICE and get them deported if they talk about the oppression and mistreatment that is getting inflicted upon them. Many Immigrants live in the shadows because of this fear of getting deported if the police stops them or interrogate´s them. According to KQE media a female immigrant Gloria talks about her experience interacting with the police and the fear that they brought to her when she went out to buy school supplies for her daughter including a hot glue gun. Gloria says“They ask me where I’m from and what I was doing. Why was I looking for a pistol? What else did I buy? And what I was using it for? I was scared because of what’s happening now.” This shows the fear that some officers inflict upon these communities.