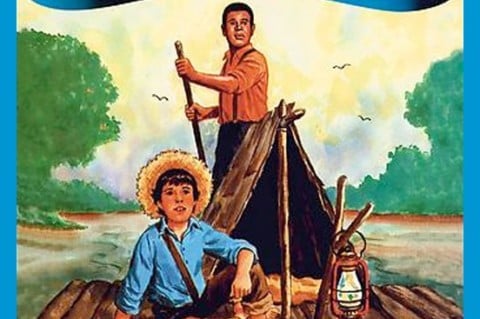 The Adventures of Huckleberry Finn, by Mark Twain, displays many intricate parts that make the novel an American classic. Obviously, there is plot development, but Twain does an excellent job in creating characters in the plot. As I read the novel, one specific character stood out. I noticed that out of all the characters that are in the plot, Huck developed the most, changing immensely and has the book based on him.

Huck is a fourteen year-old boy from St. Petersburg, Missouri. He is a medium-sized, skinny boy who enjoys rags over proper clothes, even though he was adopted to a rich widow. He says “The Widow Douglas she took me for her son, and allowed she would sivilize me; but it was rough living in the house all the time, considering how dismal regular and decent the widow was in all her ways; and so when I couldn’t stand it no longer I lit out. I got into my old rags and my sugar-hogshead again, and was free and satisfied” (Twain 1). Rags are preferred by Huck because he grew up under his alcoholic Dad, Pap, and pretty much grew up homeless. So, he took rags for clothes and had really shabby necessities if he ever attained any, making him used to them even though he was adopted to Widow Douglas.

Huck is first seen as a fourteen year-old boy who likes having fun and believes in common thoughts and follows immoral laws in the South, like slavery. As the book progresses, Huck matures, having adult mentally by being serious and make moral decisions and breaks the immoral laws in the South. Through being part of Tom’s Bandit Gang, he could have fun and have “adventures.” When he realizes that the gang doesn’t enact the same adventures like the ones in story books, he becomes disappointed, and seems to have matured. This is disproven when he plays jokes on Jim, like placing a snakeskin near Jim when he was sleeping or trying to trick Jim that he was a ghost in Jim’s dream in the fog near Cairo, Illinois. Until the point Jim talked about his family he didn’t really think of Jim as an equal human. Like previously stated, he treated Jim like a playmate with the jokes that he played on Jim. Also, he tells Jim to get things for him, like when they were salvaging things from the house washed down on the Mississippi, near Jackson island. However, when Jim started talking about his family, saying “En wid dat I fetch’ her a slap side de head dat sont her a-sprawlin’… Huck, I bust out a-cryin’ en grab her up in my arms, en say ‘Oh, de po’little thing! De Lord God Amighty fogive po’ole Jim, kaze he never gwyne to fogive hisself as long’s he live!’ Oh, she was plumb deef en dumb, Huck, plumb deef en dumb-en I’d ben a-treat’n her so!” (Twain 140). Before this, Huck was hesitant to keep Jim safe when people would ask for a runaway slave, feeling confused and questioning himself about his judgement because it was morally right, but wrong in front of the law. After this, Huck realizes that Jim has the same feelings as himself, and thinks like a full human with emotions and having a family. The moral climax and maturity came when Huck wrote a letter to Miss Watson about Jim after Jim gets sold to the Phelpses, but tears it up, marking, “I studied a minute, sort of holding my breath, and then says to myself: ‘All right then, I’ll go to hell’—and tore it up. It was awful thoughts and awful words, but they was said. And I let them stay said; and never thought no more about reforming” (Twain 191). This showed that Huck recognized Jim as a full equal and later rescues Jim from the Phelpses.

At first, Huck leaves St. Petersburg so he could abandon civilization as a whole, like the immoral drinking (so his father), religion, and other parts of that “sivilization.” At this time, he followed the rest of the Southern ideologies, and these principles motivated Huck to run away. However, the reason of running away changes later in the plot, with him running away to free Jim from slavery, motivating Huck to run away, with chapter 36’s title saying “Trying to help Jim” (Twain 219).

This plot also shows Huck’s beliefs changed. From an idle, adventurous, carefree boy, who believed in Southern ideologies like racism, he changed as the plot progresses. Huck at the end, turned into a new person through conflicts and atrocious events that happen on land, with only the river giving peace and sensibility. Huck metamorphosized into a new person by thinking that all men were created equal, via the impact of Jim, he became more serious by being less adventurous, and totally abandons society as a whole. At the end, he says “Aunt Sally she’s going to adopt me and sivilize me, and I can’t stand it. I been there before” (Twain 260).

He later on impacts Jim and the people at Phelps’ Farm with his moral equality that broke immoral laws of the south and also impacts Jim by showing that not all white men are bad. Also, he impacted Tom by showing that adventures aren’t everything and that they shouldn’t be followed, being serious as well.

I liked how Huck developed throughout the plot. At first, he was ignorant, idle, careless, and followed immoral laws. But through intense trials, he was able to blossom into a new person. He noticed that societal norms aren’t always right, all men were created equal, and that adventures and child’s play is of the past. In my opinion, Huck was a nice example of a kid near our age and that humans can always develop and become better people.

I really enjoyed your analysis on Huck Finn.

Hey there, Joseph-
Your analysis on Huck was in-depth and well thought out. I find the way that you describe Huck escaping everything about civilization, and not just civilization itself, to be thought-provoking. It isn’t something that I had considered myself, especially due to the fact that he continues to speak in somewhat religious terms throughout the whole of the book despite supposedly turning his back on civilization, including religion.
What do you believe Huck has in his heart? What drives his conscience? Obviously we see his conscience drive him throughout the novel, but what do you believe is at the root of this? Is it external factors, internal, or both?
Thank you for the look into the character of Huckleberry Finn. I believe you helped extract his character and spirit a bit better from this post, and would definitely be interested to see how you feel about whatever it is that drives him, if it is anything at all.
Regards,

Hi Joseph, I think that you did a really good job of analyzing Huck Finn. I also have to commend you on the amount of quotes you used to support your analysis of Huck Finn. I think that the quotes you used were great. I’m glad you included the quote, ““I studied a minute, sort of holding my breath, and then says to myself: ‘All right then, I’ll go to hell’—and tore it up. It was awful thoughts and awful words, but they was said. And I let them stay said; and never thought no more about reforming” (Twain 191) because in my opinion, it is the most important few lines in the whole book. It shows that rather than following societies will, he let his moral compass guide him. A question that I have for you is do you think Huck would do that for any other slave that’s not Jim or is that something he would only do for someone who is his friend?

Hey Minnie. I was also shocked when I learned about Huck’s age and I agree with you. It seems as if he had a more developed mind than what we expected and discerned from his educational level. He is clever and at the beginning of the book, he may have been less mature, using his guile into horsing around, but as the book progresses he learns to mature, getting rid of the undesirable qualities he had at the beginning. What about you? Does Huck mature and eventually get rid of some undesirable qualities he had?
I agree with you that as Huck matures, he believes that Jim and other slaves are his equals. The book shows this when Huck rips the note he was about to send to Miss Watson and tries to save Jim from the Phelps. Do you think that this event was the big turning for Huck in race relations?
Nice comment, Minnie, keep up the good work!

Hi Joseph, I wrote about Huck Finn as well for the character analysis. You hit on a lot of the points I wrote about. For example, I also mentioned how he is accustomed to wearing rags and prefers it to the formal clothing the widow puts him in. Your quote was a really great example and shows exactly how comfortable Huck feels in his “old rags”. When looking up Huck’s age, I was surprised that he was only thirteen or fourteen. On one hand, he is clever enough to seem older than that age. On the other, he still seems very impressionable, although his character does develop throughout the story. What do you think? After reading the story, would you have guessed Huck to be around 14?
One line I particularly liked was “Huck realizes that Jim has the same feelings as himself, and thinks like a full human with emotions and having a family.” I think this is a turning point in the development of his relationship with Jim, when Huck finally begins to see Jim as more than just a runaway. Do you think, as he matures, Huck will ever come to treat Jim or other slaves as his true equal?
Great analysis on Huck, it was very thorough and I agree with many of your points.