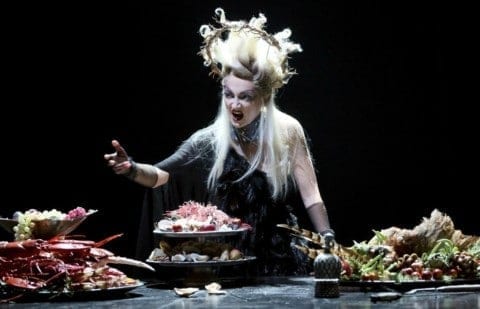 Hecate’s monologue in act three in which she scolds the three Witches shows us much more about her character and her relationship with the three Witches. By understanding Hecate further we can better understand the world of the Witches and their power structure. In this short scene, we see the three witches punished at the hands of their leader as she proclaims herself to be the “mistress of your charms” (3.5.5). As mistress is the feminine term for master, we can infer that the witches are indeed her underlings, or at the very least under her control or in her convent. The place in which they meet is rather vague, but it is night, and there is thunder present in the scene. Out of the three Witches to speak, the first Witch is the only one who has lines in this scene, when they first enter, and when they exit.

As these four characters are specifically shrouded in mystery and ambiguity we cannot really tell if a change has happened inside the minds of these characters. Hecate, in particular, appears for the first time in the play in this scene, so her character cannot be dynamic or static by this point in the scene as she has such a small role. As for the other Witches, they have not changed their opinions about the current situation as it is not their place as seers in this plot. The Witches are specifically written as static characters as they have no need to change their minds as either they can see the future and the truth to what lies ahead. Alternatively, they are manipulative women, and yet still they are static characters as they need not interfere with plans of their own making.

The motives behind each of these characters are complex and vague. The motives behind the Witches and Hecate are largely unknown, and most speculation can lead down one of two paths. The first path is one of destiny, magic, and faith. This string of ideas shows us that the Witches are motivated by their ability to see the future and help someone’s destiny be realized. This idea would be maintained by the thought that the Witches do actually use magic, and can accurately see and tell the future. In this version, they would not be acting of their own personal motivations. They would be acting parallel to the idea of destiny, and the will of the future.

The second option outlines the strictly realistic aspects of Macbeth. In this idea, the Witches are knowledgeable and uncanny wildcards that seek to push Macbeth in one specific direction. This option is centered around their personal motives (whatever they may be) as there is no larger ‘force’ for the Witches to actively maintain or help. This idea is also connected to the idea that Macbeth acted solely on his own accords as the Witches were vague in their prophecies. This is where the story becomes much more personal, and Hecate, as the master of the Witches becomes more of a puppet master than a priestess for fate.

This monologue shows us some very interesting motifs of power. With the Scotts and their noble families, there is a hierarchy shown as there is a king, his trusted nobles, and everyone else. The Witches, on the other hand, show us another hierarchy. The matriarch, instead of the patriarch, Hecate is the leader of the Witches Coven, and she governs their use of their practice. This also alludes to the themes of Femininity being fae (magical). Lady Macbeth is shown to be more magical or mystic with her chanting, and her insanity later on. Shakespeare often conveys this through the use of prose instead of iambic pentameter.

While the Witches are said to look very manly with their beards, this may just be an insult to their clothing or class. They are also specifically referred to as the Weird Sisters by Macbeth. Furthermore, Hecate in greek (and roman) mythology is the goddess of witchcraft and many other ghost-like entities. As a goddess, she is feminine, similar to the genders of the other Witches. Therefore we can sufficiently justify that in Macbeth, many female characters (at least four) are closely associated with the art of magic or the occult.

Dear Ms. McEwen:
I am impressed by your performance of Hecate’s monologue.
One part that stands out for me is, “Have I not reason, beldams as you are,
Saucy and overbold?”. Your tone in this line is serious and assertive, and I think you were able to express this because of how you changed the speed in your voice to show the importance of your words. Another that stands out for me is, “And I, the mistress of your charms, the close contriver of all harms, was never called to bear my part or show the glory of our art?” I think these lines are critical because it showed the meaning of Hecate’s appearance and monologue. Your performance of this monologue helps me to understand this character better because hearing the words of a very self-righteous and demanding character from a person of very similar traits made it very simple to understand the true tone and meaning of the monologue.
Thanks for your performance of Hecate’s monologue. I look forward to seeing what you make next. I would love to read and hear more of your work in the future, especially if it’s to read a monologue as eloquent and skillful as this one.

Dear Maximiliana:
I am very interested about your perfomance of the monologue, “On Hecate’s Monologue,” by maximiliana because it elaborates on the idea of hecates and her relationship with the 3 witches/ weird sisters. I like how you emphasize the character hecate.
One line that stands out for me is, mistress of your charms.” Your tone in this line is proud, and I think you were able to express this because of your pitch that you said this in. it sounded really proudly said because when someone says something like that they are usually gassing themselves
Another line that stands out for me is, ‘’did you dare, trade and traffic with macbeth? ” I think this line is mad because when you say Did You Dare you gave it a really strong pronunciation and grew your voice and sounded like you were pissed off. It showed how mad you were and it had an accent so it made it sound so good
Your performance of this monologue helps me to understand this character better because it shows thew way they act and how they are. This showed how good you preformed this monologue. And it shows how her relationship with the witches is. Which creates a big idea.
Thanks for your performance of this monologue. I look forward to seeing what you make next

I am amazed by your performance of this monologue, because of the accuracy that it portrays, i had never realized how much so most female characters are associated with magic, like you mentioned with the witches. I think that the same claim can be made for lady Macbeth, she definitely has those moments of being seemingly connected with spirits(or at least times that she thinks she is). Its also possible that when looking at it through the lens of freud that the all female characters are depicted as having powers over men, because of the so called “penis envy”.

Anyways i can’t wait to see more of your work.

Dear Max,
this analysis is amazing! I found that your points regarding the potential motives Hecate was driven by were extremely interesting. The way that you were able to discuss the true aspects of her character in such detail was very informative- and provided tons of insight on how she was able to impact the story as a whole. You were also able to identify the themes in the text (like the impact of fate on the main cast), and expand on it; while connecting it to Hecate (which I think is super interesting). All in all, you did a great job, and I look forward to reading your next textual analysis!! :>