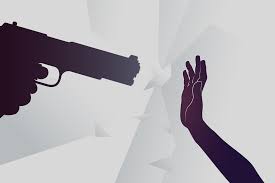 Dear Oakland Teenagers who want to make a change in gun violence in the community.

We are writing to you because we want you to know about gun violence in Oakland. We hope that after reading this letter you help the community in fighting gun violence.

According to our research, gun violence is a problem.

The first problem is that gun laws are not strict enough. I say we should make a law where if you own a gun you could only use it if it’s a life or death situation. Or if we could only have it at surden age. I say these should be turned into a law and if they don’t follow it they should be arrested.

Thirdly, the people being harmed or oppressed by gun violence are those who are unexpectedly shot. The shooter benefits from this harm because he/she enjoys it. The level of oppression is institutional because it involves people breaking the law. People that cause harm have made the issue worse because they don’t agree and follow the law.

The community was surveyed about Gun Violence to find out what they knew. We surveyed because of our  school or family members. The number of surveys was 15.

Based on the surveys data it shows that people said that gun violence has  increased by a lot and decreased.

Figure #2: The Graph shows how gun violence has increased a lot mostly because of death rates going up. Also that but because everyone nowadays is trying to act hard or have it because they think it makes them cool. But we could change this by making guns harder to sell and stop selling it to young people.

Figure #3It is clear from the graphs that making guns harder to buy and by using them for emergencies only. Gun violence will decrease if we make this a law or if they just stop selling guns to people.

Based on the Survey and Research as we need to educate people about the issue of gun violence and how they can push the community to make the violence stop.

What we’re going to do to advocate and spread the information is make more surveys to get info and make changes to the community.The steps we will take are getting the surveys ready so we can send it to people or family so we can get their opinion.The obstacle we expect are people probably refusing the survey.

My second aim is to make big and small flyers that we can hand out and post up around school or outside of school with information.The steps we will take will be getting a lot of paper so she can do the flyers.An obstacle we will face is people ripping off our posters.

My third aim will be making a lot of billboards and youtube ad’s so people can see them and advocate.First I will make a contract with youtube so I broadcast my message across screens.

We would know if we were successful if we see more students spreading the need for more gun laws, community interventions, and true gun violence statistics.

“Four Experts on What Has Worked to Curb Gun Violence in Oakland.” The Guardian, Guardian News and Media, 12 Dec. 2019, www.theguardian.com/us-news/2019/dec/12/whats-driving-the-sharp-decline-of-gun-violence-in-californias-bay-area.