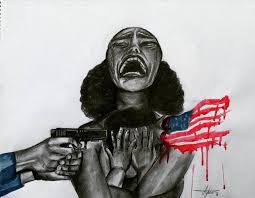 The purpose of having a police force is to preserve the safety one seeks, but what happens when that safety shield gets broken? In the case of police brutality, hate, violence and stigma against people of color is placed, inducing fear.

Based on our research, police brutality is a public health issue that should be addressed due to its damaging effects on the Black/African American Community. Police brutality is associated with poor mental health, how well people perform in various aspects of their lives like school. Not only that but it carries a stigma which makes people feel unsafe.

To begin, police brutality is one of the several ways institutions use to oppress others based on their race. The article titled “Antwon Rose’s killing by police affects blacks’ mental health across the country” by Alexander Tsai et al. was published in 2018 and addresses the impact police brutality has on people across the country and how those incidents result in the poor mental health of Black/African Americans. It emphasizes, “Instead, black Americans experiences collective psychological upheaval in the aftermath of police killings of unarmed black Americans because such incidents reflect structural racism — the totality of ways in which our society devalues black lives” (Tsai). Throughout centuries, the Black Community has been fighting for their rights and to be seen as a human. Meanwhile, the continued police brutality cases only bring the reminder that this racism and unfairness is still present through the institutions. Racism is used through the institutions in society to maintain control over certain races. That is why the majority of the people in control are of white race so they decide what rules or content to put out in society that only benefits them and helps them stay on top. Seeing that police institutions are mainly targeting people of color, puts extra stress on the community creating an unhealthy mental state.

Besides the fact that police brutality is used to oppress others and procures poor mental health. But, it also creates an impact on the way people feel, whether or not they feel safe and secure. On the article, “The Ripple Effect: Police Violence, Black Americans and Mental Health” by Melissa Riddle Chalo, who is a contributing writer. Chalo highlights, “Additionally, being exposed to police violence naturally causes feelings of disillusionment and distrust of a government institution that is supposed to exist to protect the community”(Chalo). When the institutions who have power act unjustly by doing acts of police brutality, this type of behavior is normalized and continues to proceed. This is abusing their power to get control of people just because they are law enforcement. All this violence gives rise to fear, that now black people don’t know who to seek safety in and they build distrust towards the authorities. This distrust keeps people from speaking up and going to authorities when they have problems because they feel that the authorities are not trustworthy and/or reliable.

Not only is police brutality used to oppress others and imply fear, but it has an intense negative impact on education within the black community. In the article titled, “Police Killings and Violence Are Driving Black People Crazy” by Brentin Mock who worked as the justice editor at Grist and now is a staff writer at CityLab, it discusses studies that have shown that police killings and violence affect the mental health of African American students in a negative manner. Mock writes, “Classrooms that have large numbers of students who’ve been exposed to violence end up having lower test scores than students with fewer or no students exposed to violence” (Mock). Clearly education is getting affected because of police brutality. This is significant to the Oakland community because there are lots of cases of police brutality and that is one of the reasons why our academic scores are decreasing. For that reason, police brutality should be addressed because by doing that, it can help ease our community’s achievement gaps.

Proceeding my research about police brutality, I found that a lot of police brutality cases are in the Oakland area as well as the fact that people of color are targeted much more by police brutality. That is why the community that was surveyed was mostly people that live in Oakland, and we hoped to find out many of the correlations that the participants had with police violence. We got a total of 20 responses to answer our 15 questions about their thoughts, experiences, and encounters with police. When participants were asked if they have ever had an incident where police brutality occurred near or in their neighborhood, 55% of the participants responded with yes. Moreover, something that we came across was that although not many of the participants were Black/African American, all the Black/African American participants stated that they have had a negative encounter with police before. This only shows the institutional racism and stigma that is present towards people of color. 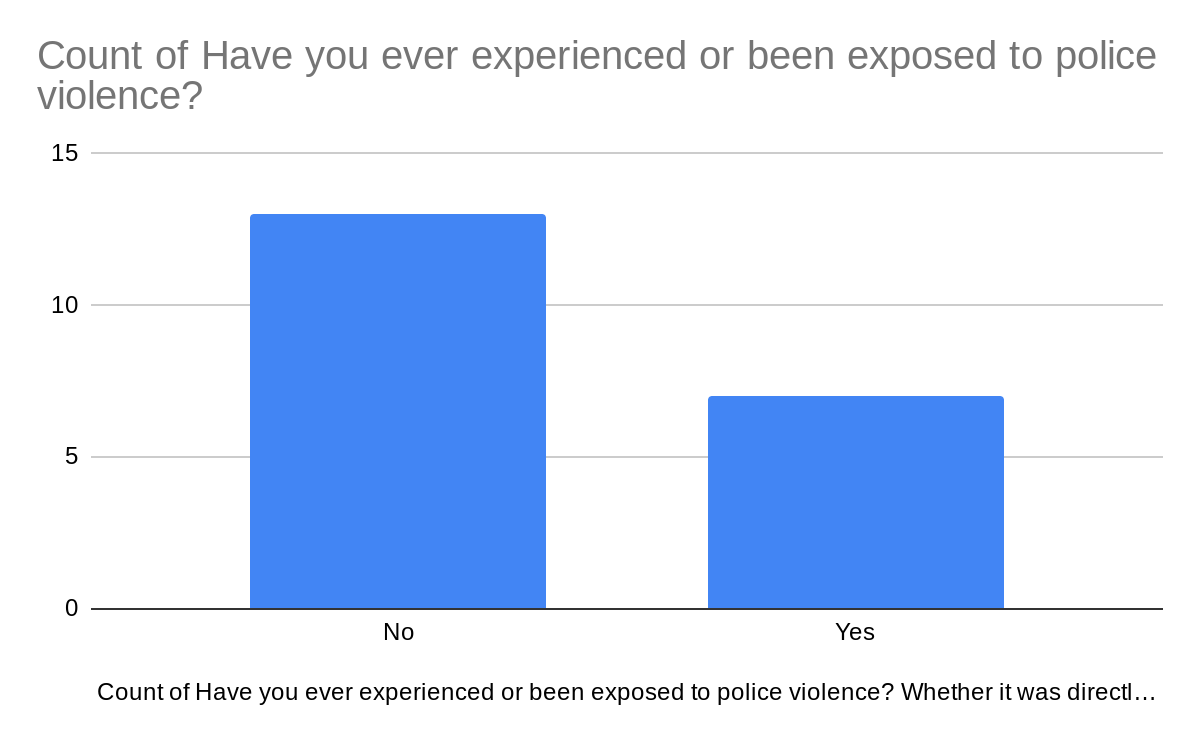 Have you ever had a negative encounter with police before? 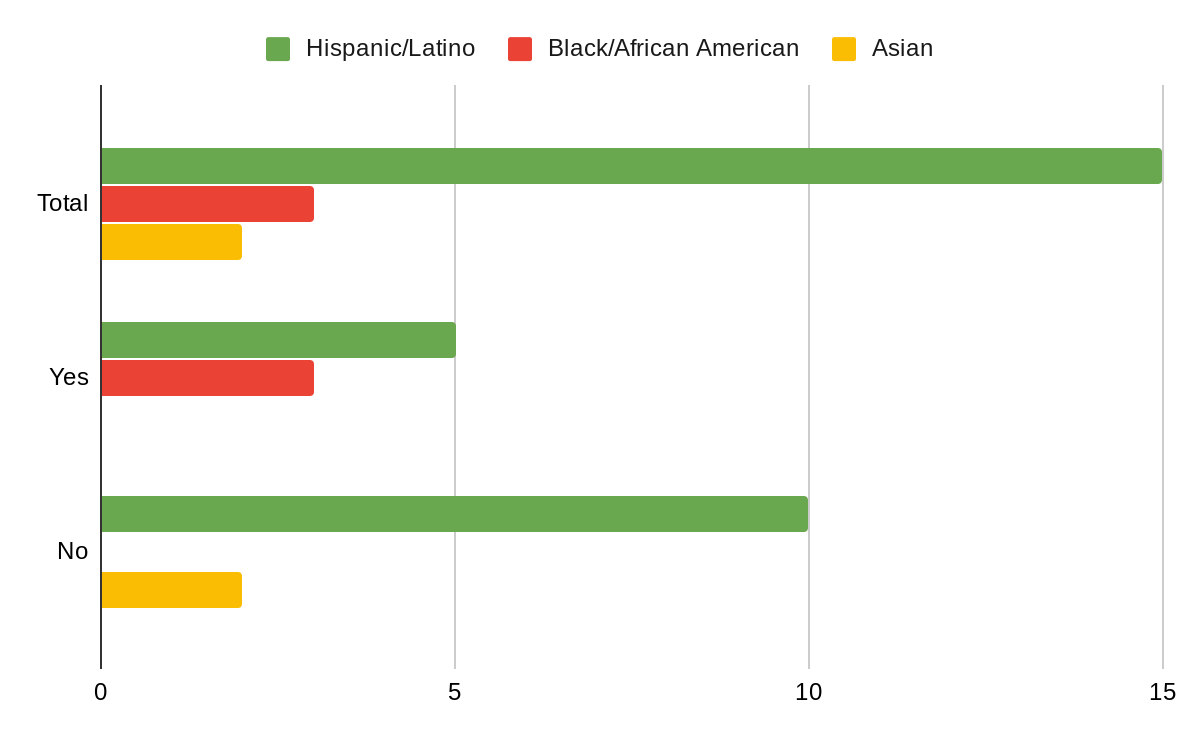 Figure 2: This bar shows the participants ethnicities as well as their answer to the question on whether or not they have had a negative encounter with the police before. 100 % of the Black/African Americans answered with yes, and 100% of Asian participants responded with a no. 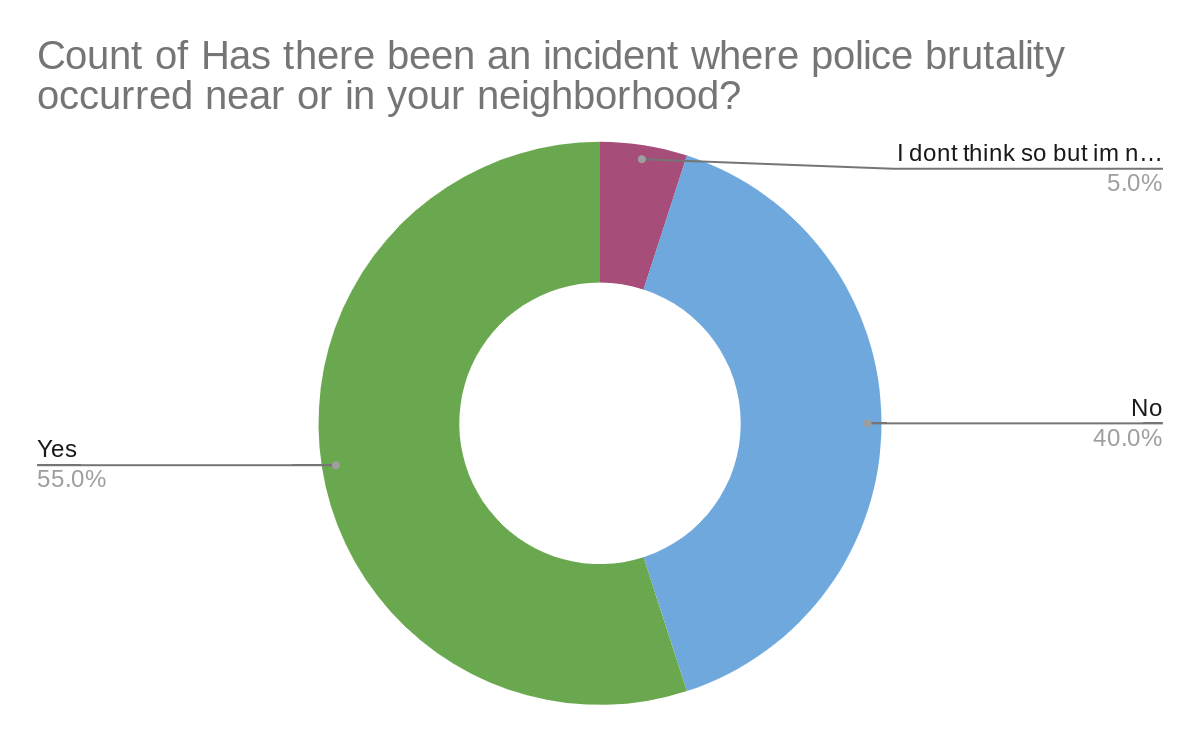 Figure 3: 55% of people have had an incident where police brutality occurred near or in their neighborhoods.

Based on my research I found that the Oakland community has had a plethora of negative encounters with police before. So, the steps I would take as an Upstander, Organizer, and Health Advocate to help the public issue of police brutality is to get people more informed about the effects of this issue, have people talk about how police brutality has affected them, and lastly build new laws against police brutality towards people of color.

The steps I would take for my first aim would be to make an instagram for police brutality, where there would be more information on the effects of police brutality and some ways to help this issue. I will make sure to post everyday and add to my story. The posts would be of actual footage of police brutality, quotes, and artwork as well. This would be effective because it would make people be more aware of this issue and help get more people to support the cause. Nowadays, people are all over social media and spend hours on their phone every day. Younger generations would be able to be informed and in the future they can be able to do something about this issue. Though some obstacles that I expect are not getting noticed, gaining followers and making sure to provide quality content for everyone of different ages.

My second aim is to get people from different backgrounds and cultures to speak about how police brutality has affected them. This would be effective because it would bring more attention to the issue through the voices of others and it would provide different perspectives that one may relate to. I would also encourage other schools to do the same and find different ways to approach this situation. Many individuals relate to this and can be able to give advice to each other on how to approach certain situations. This is a great idea because it doesn’t have to be only at school but can be continued on social media, where people can share their stories as well and build rise to this important issue. The steps I would take is to first find people that would want to speak about how police brutality affects them and then organize a whole school meeting where they can share out. I would also invite others on social media to do the same, that way more people are aware of this and if they have a story to share they would be able to. I would need approval from the principals to allow this meeting to be able to happen and support from students who would want to speak out.
Some obstacles I would expect is actually finding people that would want to talk about that issue because I know that it can be a very sensitive topic.

My third aim is to make new laws against police brutality and it would be effective because the issue would be addressed and actually have something done about it, like a solution in a way.
The steps I would take is to organize people and come into an agreement on the laws that would be effective to prevent or fight against police brutality. I would also have famous people talk about these to make sure people are informed. Obstacles that I would expect is to actually having the new laws be approved because it is difficult to create specific laws.
I think laws protecting residents from excessive force utilized by police should be implemented.

Institutional racism and control have been portrayed through police brutality acts, these violent acts are not just targeting anyone, they are mainly focusing on the people of color specifically the Black/African American community. This implements insecurity amongst the communities of people of color, following lack of trust, fear, and leaving a trace of poor mental health. Such negative impacts affect the daily life in all aspects, for many it is their performance in school, work, etc. We hope that you recognize the significance and the negative impacts that this issue brings, and take into consideration the suggestions we depicted as possible solutions towards the ending of police brutality.

I would like to appreciate you for following through and I genuinely hope that we can help make a change and hope you can help me bring more attention to this issue through my instagram account @justice_police_brutality. It is vastly important that we get our message out there to stop the injustice of police brutality, when we come together we are able to create a greater change. #policebrutalitymatters #makeadifference #justice