The Thing about Taxes 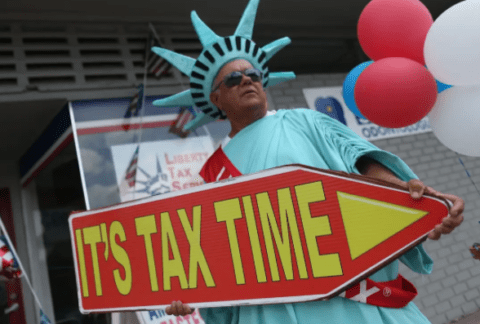 Taxes are a necessary evil. They pay for our government, military, public transport, infrastructure, and police force. But the tax system is being abused by the government, and needs to be cut back and reformed.  Some major issues include the government taking too much from taxes, taxes being used unnecessarily, and the government getting involved with taxes where it shouldn’t.

The biggest issue with taxes is how much people are taxed and government workers are paid. Currently, the POTUS is paid $400,000 a year with members of congress being paid $175,000 – $275,000 annually. Congressional salaries have not risen since 2009, but “Under current law, lawmakers would receive a 2.6 percent pay adjustment, or $4,500, in January” (from Politico Magazine). But all this money comes from taxes, which means it comes from workers. Everyone from minimum wage workers to CEO’s are taxed via income tax. They are not taxed equally, but they are all taxed too much.

While congress members are guaranteed $175,000 a year, the federal minimum wage is stagnated around $7.25 an hour. If a minimum wage worker works full time (40 hours a week), which most minimum wages jobs do not allow, for a full year (52 weeks), they will make $15,080 annually. This is where tax brackets come in. The lowest tax bracket is 10% for those who make up to $13,850 a year, which is less than minimum wages. People who work minimum wage are taxed at 12%, which is $1,809.60 taken from their income. This is only the federal amount. They still have to pay state and city taxes after this, so of the $15,080.00 they were paid, they get less than $13,270.40 a year to live off of. The highest tax bracket  is for those who make over $510,300.00 a year, and it is 37%. Many of these people are professionals and business owners who provide greater services and employment to the community than congressional workers, but lose over a third of their paycheck to the government. Again, this is only federally, state and city taxes have to be added. This hurts all workers, minimum wage and up, because since they are taxed so heavily, wealthy companies move their money, jobs, or even companies to different countries to escape the high taxes. This means there are less available jobs for those who need it. If businesses had much lower taxes, it would incentivize them to stay in the U.S., employment rates would rise. Companies would also have more money to pay their employees. It should also be mentioned that government workers do not fit in these tax brackets because government workers are not taxed by the institutions they work for.

Other issues arise when taxes are used inappropriately and in situations where they shouldn’t be. For example, exorbitant amounts of tax dollars are used on the military. While America should have a strong military, much of the equipment paid for with taxes  is not being used, especially some of the more expensive items. The military has even asked for spending to be cut down, but congress keeps voting to increase it. In 2012, congress voted to spend $183 million on tanks alone despite the army arguing against it. According to a story from military.com, “The Air Force has spent $567 million on 21 C-27J aircraft since 2007” and at least 17 were sent straight to storage because “because the military has no use for them”. This type of tax spending is not only excessive but wasteful.

Sales tax is an instance of taxation where it is inappropriate. Sales tax is where whenever a person or company pays for a good or a service, they have to pay a little more in taxes. The government has no participation in these transactions, they are between two private parties. Despite this, the consumer is legally charged extra. The problem is that the consumer is everyone from minimum wage workers to business owners. So even with the $13,000 they have left in their paycheck, minimum wage workers have to pay more taxes on everything they buy. Necessities, such as food and shelter can have sales tax on them. It is inappropriate to use both sales tax and income tax. If workers are being taxed for their labor, why should they have to pay more with the money they have earned. If citizens are taxed on all of their private transactions, why does their labor need to be taxed.

The function of government is to be a civil servant and protect the rights of the citizens. It needs money to be effective, but the system in place to get funding is being abused. The ways in which taxes are collected are invasive and detrimental, and often taxes are spent on fruitless efforts. That is not the government serving its function.