America Means America, not the U.S. 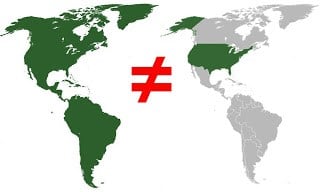 The concept of the world “America” or “american” is generally pretty similar across the U.S. and other english speaking countries. The details of the definition can vary, but all of them are moderately around two central ideas: Being an “american” is to serve the U.S., or being an “american” is to change and improve the current U.S. We see this first side from Tegan Griffith, a U.S. Marine Corp sergeant from Wittenberg, Wisconsin who explained how she feels about the word “America” in the film American Creed. Griffith commonly comes back to the concept of patriotism and a duty to serve the U.S., saying that “I was getting out and doing something at the heart of what is important to my family: serving the nation during a time of war” (Griffith). This patriotic definition would be a great way to describe the word “American,” but alas, there is one major flaw. America is not a country, and an American is not necessarily a person from the United States. By simplifying the term “America” to specifically relate to the U.S., you lose out on an entire continent (or two depending on how you count) of wildly different countries and cultures.

Counterpunch author Garry Leech points out this flawed yet common definition of “American” in their article “US Americans Are Not the Only Americans.” Leech talks about how most U.S. residents probably don’t even realize what they’re doing, simply going with the most popularly used definition of “America,” “And, in recent decades, every US president has ended speeches from the Oval Office in the White House with the phrase ‘God bless America’” (Leech). This article much more greatly expands on the current common definition of “America” by simply stating the obvious, America isn’t just the US. It avoids generalization and points out how this simple generalization is harmful to the rest of the people that live in America. While Leech does not directly call out Griffith’s understanding or the general U.S.-patriotism understanding of “America” as wrong, they do point out how this definition is not the best to perpetuate, and people should work towards a better, more inclusive definition.

To me, “America” is a word that simply has too many conflicting definitions to be properly used. I choose to avoid it in favor of more specific terms, allowing me to use it properly in defining a landmass. My experience in growing up and living in Berkeley has taught me to be more open and considerate about opposing views on many conflicts, and a definition of a word is no different. America the continent shouldn’t be limited down to a single country, it should be a uniting word to bring together many different peoples and cultures, all spread across the great mass of land that we share. This should apply to “American Literature” as well, by not only focusing on the literary works and stories of those who live in the U.S., but also those found across all of America to educate and connect to stories one would not commonly hear if they isolated their country from the rest. There There was a great dive into the consequences of purposeful U.S. erasure of a culture, and is a great stepping stone into understanding how much the U.S. erases, whether it be intentional or otherwise.

Leech, Garry, “US Americans Are Not the Only Americans.” https://www.counterpunch.org/2018/11/07/us-americans-are-not-the-only-americans/