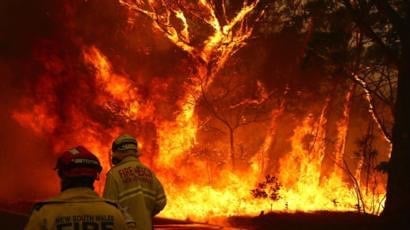 I’ve chosen to study the Australian brush fires, and global warming. Global warming is going to affect me for the rest of my life, so I’d like to know as much as I can about how I can help. Fires have been burning for months now burned nearly 18 million acres. This burning is destroying habitats for animals that take residence only in these areas which means that multiple species are on the verge of extinction. Along with that these fires are not going to get better since our climate is worsening at its the main cause of these extreme conditions.Climate change only worsens the conditions for fires and droughts only make for more intense fires and longer fire seasons. “A large oceanic temperature gradient, the Indian Ocean Dipole, affects weather in East Africa and Australia. And how climate change could make this season’s disastrous weather the new norm.” says Vox videos, they are basically explaining to us how this directly relates to global warming and what proof we’ve obtained. Basically there is an area in the indian ocean that we’ve been tracking called the IOD. it’s been known that when the ocean is moved in certain directions it shifts the atmosphere in both Africa and Australia, if the heat moves towards one place then it creates an excess of water and rain (the current floods in africa) and so therefore it’s cold on the other side cause large droughts which have led to Australia’s largest fires yet.

Currently for the fires the US has sent firemen to Australia and people are donating money to help in all ways, however for years people have been trying to solve global warming. Unfortunately, it requires each and every person’s help and acknowledgement before we’re going to make any drastic changes.So we want to make sure there is scientific fact proving it and add more of the emotional part to tug at heartstrings.We want to bring awareness so we’re just going to talk about what’s happening in Australia to the animals, people, and environment. We also included photos that show what’s happening rather than just saying it is. We do however have a small solution that has been around for years and will help not necessarily prevent but regulate situations similar to this one. “The Aboriginal people would set small-scale fires that weren’t too intense and clear the land of the extra debris. The smaller intensity fires would lessen the impact on the insects and animals occupying the land, too, as well as protect the trees and the canopy.” In our actual artifact we didn’t use this as a solution since it probably wouldn’t be helpful if a whole bunch of random people started doing this, it needs to be skilled professionals who know what they’re doing so we leave that to those who are in charge and from the sidelines we will just bring awareness.

For further research I’m going to try to keep up with the new information thats flooding in. I think this project is hard to do at the moment and will get easier as the fires slow down. I’m also going to keep up with the IOD to see if other weird things happen there similar to this. I will obviously also keep up with similar events that are occurring around the globe and help bring awareness to them.