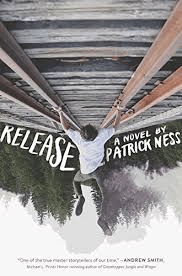 Release by Patrick Ness is a young adult LGBT novel that focuses on 17-year-old Adam. It’s a one-day-in-the-life of Adam. And this specific day is going to change his life forever. Weird things start happening, things go wrong, chaos erupts. His relationship is fracturing, an unpleasant incident with his boss at work, his incredibly religious family and the unrequited love of his “ex” Enzo. And in all this chaos happening he has to let go.

The final chapter of Release by Patrick Ness might leave a reader feeling slightly unsure because in the last couple of pages, a ‘story” about a boy and a queen is being told. Throughout the story, you may notice some stuff that will leave you feeling confused like I was. But in the end I was able to understand what the story represented. An example of this is on page 276.  “ ‘Oh,’ says the spirit, with a surprised laugh. ‘Yes I have found my release…’” At first it was confusing until I realized what the rose really stood for. The rose is supposed to represent something that makes you happy. It’s your “release” from stress or anxiety.

So far, the theme in Release might remind a reader of the plot / theme in a song called “Now I’m In It by HAIM. In  “Release” Adam has to let go of all the things that is making his life so chaotic, much like the song, where the lead singer, Danielle, is having struggles with her inner emotions and has to let go of those deep, dark and depressing emotions.Readers will definitely like this book. It was very interesting and kept me engaged the whole way through.