The Streets of Oakland

Home 2019 December 20 The Streets of Oakland 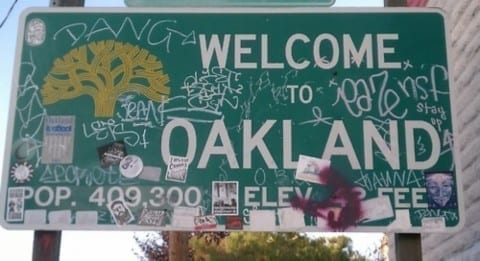 The Streets Of Oakland

“You think Oakland California is a city of punks.” These famous lines from Too $horts song, “I want to be free” illustrates many of people’s thoughts about Oakland. This might be true to some people but not for all, Oakland CA is a city about excitement where nobody is antisocial and the community is diverse, in Oakland people make sideshows for fun and anybody is invited but one is there at their own risk. Many people see Oakland as a “dangerous place” but in reality is how you act, and though the thoughts of Oakland are immutable there are great communities within it. On the contrary,  some places are dangerous because of color clothes a resident wears.Based on the research it is clear that Oakland is diverse and each neighborhood is different that it is not fair to judge the city.

Deep East can be a very hard environment to live in. Its very strict in what you do most crimes come from, “the most ghetto” but in reality because of how strict it is to live there many crimes happen because of decisions of others to degrade people.

Some parts of “Deep East” like Seminary is known for having lots of colleges but at the same time very dangerous. Deep East is also full of gang areas if you wear the wrong color in the block you will get shot no matter in what way you use it. Ms.Liz states, “Every street has become more dangerous each year”(Liz). Many would agree with Ms.Liz because many people also see the change throughout the city. But its never to late for the city to adapt.

Murder Dubs is more of a Norteño/red color gang area. The streets 20-29th are considered part of the Murder Dubs and “Dubs” mean twenty. In the 80’s the Murder Dubs were called “The Twomps” with International blvd. Same thing also goes with the Dubs if you wear the wrong color you will instantly get shot. After the 80’s thats when the name Murder Dubs came to the twenties.“Streets are all broken down”(Chupin).

Jingle town is a place inside Fruitvale which is another place located in East Oakland it may be a little hard to find because its a very small place . There is not much facts about Jingle town. “Jingletown, also known as the North Kennedy Tract”(LocalWiki)

In conclusion, Oakland is a dangerous place but is a place of community where people feel comfortable to meet new people but are very secured about things they do.

My uncle said that Oakland got a little more dangerous it use to be more calm but now the crime got bigger and a lot more violence now it’s dangerous to even wear clothes. The streets are all full of broken roads, its not the same. He has lived in Oakland over 15 years and for living that much over time I know he has seen change.

Ms.Liz said the streets of Oakland get more dangerous each year and that its never to late to go back and fix mistakes I chose her because I know she can explain perfectly how it was back then because she is kind of old.

The Streets of Oakland by Nina is licensed under a Creative Commons Attribution-ShareAlike 4.0 International License.