Teachers and Rent in Oakland 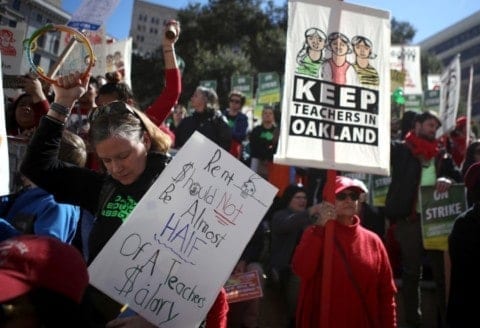 What is a giant problem that teachers are struggling with? The average rent in Oakland is $2,916, an 8% increase compared to the previous year (Evidence of this statistic at https://www.rentcafe.com/average-rent-market-trends/us/ca/oakland/). Teachers struggle with paying rent because of the low amount of money that they get paid. It is clear that the research and interviews show that rent levels going up in Oakland is having a negative impact in Oakland teachers because teachers that are and teach in Oakland can’t afford a house in Oakland and they also need to get second jobs because of the low average of money that they get paid.

A plethora of teachers are having struggles with their house payments. According to a CBS News article made by Aimee Picchi, “Teachers in the U.S. are getting a grim lesson in economics as their pay is eclipsed by rising housing costs. The result: New members to the profession can’t afford the rent in all but one major U.S. city, according to a new study from Zillow.”(Picchi). If new teachers can’t afford a house, then they won’t be able to teach. If they aren’t able to teach, then schools wont have new teachers to teach their students and there will only be substitutes.

On top of having trouble with payment, because of payment, teachers are getting second jobs to get paid better. According to a Pew Research Center document by Katherine Schaeffer, 16% of teachers have second jobs that are not school based summer jobs and 18% of teachers have a second job during the school year (Schaeffer). This also endangers the education of the students and the time of the teachers because the teachers will have less time to teach or grade their students since they are at their second job. This can cause the teachers to get fired from their jobs and replace the teacher with a new teacher. But as the article in the paragraph above said, new teachers can’t afford houses in Oakland which will make the schools in Oakland have fewer teachers and fewer opportunities for the students to learn.

Teachers struggle and some believe that there is no solution for what is happening to them, also known as gentrification. But, there could be solutions for this, an interview with Eva Oliver, a teacher from Life Academy, states, “A rent program for teachers in Oakland like the one that there is in San Francisco would really help teachers in Oakland to live in an affordable place” (Oliver). A renting program could be a great opportunity for teachers in Oakland. Then they won’t have to worry about their rent and they won’t need second jobs. The teachers will be able to pay more attention to their teaching job. While this helps teachers, it also helps the students and the school. The reason why this would help teachers is because students will get more education since the teachers are paying more attention to them. This also helps the schools by allowing new teachers to join the renting program and join schools in Oakland that need new teachers which also helps students. More teachers, less rent, more education, more opportunities, more liberty.

In conclusion, teachers are being affected by by rent because of the low average of their salary and the amount of rent that is needed to pay. But, if this keeps being a problem for the teachers, they might decide to leave their jobs for one that pays them better so that they are able to afford the house that they want. Then, how will the students learn what they need to learn to develop their mindset. They won’t be able to learn one of their majors because there are fewer teachers, and since they didn’t learn there major, there will be less people in the future that can help the community. For example, there will be less doctors, less construction workers, fewer people in jobs because they weren’t able to learn what they wanted to be. Why not help teachers and prevent this tragedy. Another argument should be, if Donald Trump argues that he wants to “make America a better place”, why does he not put some of the undeniable myriad of money that he has on the districts so that they could pay teachers better, but that is a whole different story.

Aimee Picchi works with CBS news. Her news talks about teachers not being able to afford rent in the United States. Majority of the teachers can’t afford rent because of how low they get paid. This source is reliable because it is from CBS news, it is a news article. It was also published in 2019, so it is talking about the present.

Mr. Gardner is an Oakland resident and has taught in Oakland for years. He bought his home so he does not struggle as much with rent But he knows that his loved ones and his friends are being affected by rent which is something he does not like.

Eva Oliver is an 8th grade humanities teacher at Life Academy in Oakland. She used to live in Oakland but she left to live somewhere more affordable. This can waste her time because she teaches in Oakland and she lives far away, so she also needs to spend her money on gasoline to get to school and teach. Oliver is trusted because she has been an Oakland resident and she has taught in Oakland for years.

Teachers and Rent in Oakland by Cesar is licensed under a Creative Commons Attribution-ShareAlike 4.0 International License.