Skateboarding in the bay area 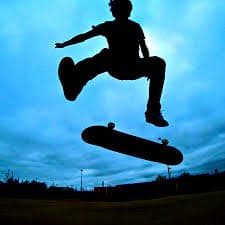 A place For Everyone    According to Huckmag K-Dub did hard work to build from the ground up skatepark in Oakland after there were only just a few and also a way to bring the community together. (https://www.huckmag.com/outdoor/skate/meet-k-dub-hard-hustling-visionary-behind-oaklands-diy-skate-park-town-park/). Based on the Research it is clear that K-Dub is changing Oakland Skate culture for the better, but the city still needs to do more to help out people.

Firstly, K-Dub is helping skate culture by building parks and bringing awareness. However, There is still a lot that needs to be done because some people like to block skaters.

In many public places in Oakland and the Bay Area, people screw metal rods in cement blocks where people sit on to prevent them from riding on top of them, but Oakland doesn’t do much or spend money on skateparks. That’s why people  skate around the city because they don’t have anywhere else to skate around, people see skateboarders all around the city there are almost no skateparks in Oakland. The city has nice places so people go there but also ban skateboarding so people don’t do it which is dumb because its a public area and people take items like backpacks purses and bicycles there so why would they not let people use skateboards there.

The plan for K-Dub all along was to make a place for everyone to bring a community together and anyone is welcome there, people have gone there also to do art because they get permission to do graffiti around the place so people don’t just go to the Town park to skate there are other reasons to go there some people go there to just hang out with friends so there is always new people there because of the area being so popular it could get Oakland to help by building more skateparks around the city for people as they see that it can give a positive effect it can be a thing where people go there to be comfortable also by restricting less the use of skateboards around the city because there will be more people at actual skateparks than the city causing less people to possibly trespass into a place just to do something with a skateboard. Skateparks are not just for skateboarders people who use scooters also go there because there are a lot of cool  you can do with a scooter.

In conclusion, Oakland can do a lot more to help out people a lot because they can always come out with positive outcomes like K-Dub did and also restrict less how much skateboarding gets used out in the city.

In this interview with Jesus he talked about how there are almost no skateparks and how it got to the point to where a man had to build one himself for other people to go there and Oakland needs to do more to help the community out. He mentions that he has been skating for a long time and has never had a good place to practice so like K-Dub building more skateparks would help a lot

In this interview with Roberto he talked about how Oakland should do a lot more to help us out because if they want to bring the community together they should help everyone and over the years they haven’t done much. Roberto states he grew up skating and also never really went to skateparks because there were none.