Undocumented People Mark Their Spot in The USA 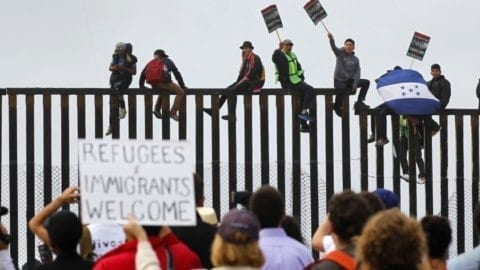 “Sometimes I feel like I can’t set my roots here completely because it could be taken away,” said Andrea Barba, undocumented women and an OUSD graduate. Undocumented children come to the US so they can get the life their parents promised them. But when they face the discrimation they receive it doesn’t make them completely safe in the land of “The Free”. To be free means not to be under control and have the ability to do what one wishes (Oxford). This same adjective is used to describe the US. Yet these ‘immigrants’ have limits that were decided by someone else. The US is a land of immigrants but we treat immigrants like the other, said Nalini Krishnankutty. According to studies and interviews, undocumented people deserve respect and equity as citizens not deportation because they have adapted to living in the USA, because they lived in the U.S. for most of their lives, and because they have successfully graduated from US schools ready to contribute to society.

Thousands and thousands of undocumented people come to the US each year. Most of them are young. And as they grow old, they start to consider the US as home instead of their home country. Yehimi Cambrón, an art teacher at Cross Keys High School, described her experience of going back to her town in Mexico and was stunned by how different both locations (US & Mexico) looked. She then realized why her family didn’t come back. Yehimi quoted, “Our plan was to save up and return [to Mexico] after five years…But your children start growing up here, and they become Americans because they grow up just like the other kids. It’s not until adulthood that you transition into that illegality. We just adapted so well.” (Josh Green). Yehimi Cambrón’s family had a plan to go back to her town once they have money but even in 5 years, they had gotten used to the US struggles and benefits. They are not ready to leave, in fact they don’t want to leave at all. The way the US adjusted white documented youth lives was the same way that changed undocumented youth. White youth has always understood the community they live in and undocumented youth are just learning to understand it at a very young age. Soon, both different ethnic groups of understanding will quickly escalate to the same level. Undocumented will identify themselves like prioritizes children too until they realized that they didn’t have documents that proved they were from the USA. Cambrón’s sentence reads, “We just adapted so well” which shows that after living in the US for her whole life she understood how the society works in America. More than she ever did in Mexico. Cambrón didn’t even know she was undocumented. She seems saddened by the fact that she can’t do many things she thought she could. And with these limits, undocumented youth will have to shorten their dreams. Not being born in the US should NOT be an impediment for undocumented people to be successful in their goals because undocumented people staying here has made them prepared for that succesful future they have planned for all their lives.

Oakland needs more educated people. People who have shown hard work in which leads to them in their high power positions. Most of those people can be undocumneted people who have graduated from US high schools. Andrea Barba, a OUSD graduate discusses, “It hasn’t changed because I feel that it is more convenient and easier to access materialistic things.” (Barba) In other words, Barba is saying that US gives straight forward access to things people won’t be able to back in mexico. Barba has kept that view of the US all her life.  Barba’s intent of saying, “convenient” & “materialistic things” is that the US has a much easier strategy to finding things in what certain people need. Undocumented youth have a specifc kind help for their level of education that they wouldn’t recive in their home country. And that is why undocumented people can get a better chance of a successful education than in the country they came from. Taking their one and only chance their parents worked hard to give them can possibly destroy them from ever having a better education than anywhere else. A statistic proven by US Dept. of Education 2015 in San Diego State University reads, “Approximately 65,000 undocumented students graduate from U.S. high schools every year, 25,000 of those students graduate from California high schools.” (SDSU) What this fact is implying is that California high schools is the most common state for undocumented students to graduate. California is known to be filled with people of color. Not only is this state so common for undocumented people, but it is probaly the safest for them. My assumption for so many undocumented people adhere in California is that there is a lot more opportunities and programs specifically for those groups than in any area in the US. Which is probably why undocumented people call the US home. For them to recede to their forgein country, it’ll be like they discovered a whole new world besides the fact that they were born there.

Furthermore, undocumented people deserve respect and equity as citizens not deportation because they have adapted to living in the USA and because they lived in the U.S. for most of their lives and have successfully graduated from US schools ready to contribute to society. Intelligent undocumented individuals get deported back to their country is equvlient as to enable the stereyotypes spreading onto future generations. Not only in Oakland, but the entire nation. We cannot depend on one single, possibly a cruel leader (our president), we need to depend on each other as leaders. We still have the ability to stop the oppressive history from repeating itself into our presence.

In this interview Andrea was reflecting on her past and her early memories of her journey coming to the US. When she was reflecting, it was a bit emotional because she never really took time to look back. Andrea left at 3 months and went back when she was 8. But after a year she went back to the US which negatively affected her education. This intelligent experienced female was chosen to be interviewed because she had been raised here and understood the US circumstances. She has been to both locations. With those two views, she was able to compare both of them, the similarities and differences. And she had tons of differences.

This article talks about 6 undocmented individuals that lives in the US and so far sum up how different their lives were from documented youth. Not only that but they had realizations and struggles too. But with all theses mistreated experiences, they have learned from them. Which also lead them explaining their successes too. But only one of the undocomented individuals were mentioned in this writing. Yehimi Cambrón was extremely specific on how she and her family adapted to the US.

Nalini reveals that common actions Americans do actually inherited from the very first immigrants that have settled here before the spanish explorers. Nalini also shows that immigrants were never welcomed in the land they claimed first. Which opens to the similarities that occur to the discrimmantion immigrants deal then and now. Nalini is a writer, researcher, and speaker. She is knowledgeable to speak about a topic like this. She is experienced too. This makes her trustful and believable about what she says.

Lexico is a dictionary that includes translation to multiple languages and thesaurus (a strong resource for synonyms and antonyms). This online dictionary is powered by Oxford University Press and Dictionary.com. It’s powered by the oldest english-speaking university.