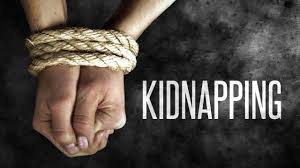 Secondy, there are many possible reasons why people kidnap. So many people kidnap for weird reasons, most people kidnap only for money. In an article written by Okwuagbala Uzochukwu Mike P he stated, “The high unemployment rate in many countries has forced citizens to find other ways to make money—and some of those ways are illegal. Kidnapping a rich person can be a lucrative business. A cash-strapped unemployed person may believe that when he kidnaps someone who is rich, he may be able to become rich himself” (Uzochukwu). This Is basically saying that when some people are unemployed and they can’t find jobs and they still need to make money they decide to kidnap kids of rich people thinking that they will become rich as well. Which is obviously illegal but they still do it because they want to make money a faster way since they are forced to find money in different ways. This is only one reason people might kidnap. This is understandable because many people do kidnap for money by taking a child calling their family for money and they will get their child back. So how do we stop people from kidnapping? A possible way for preventing kidnapping is always watch the children and keep them safe. If this is not possible try giving children a weapon if they have to walk home by themselves. This Is a good way because if they feel like they are being watched, being followed, or someone is violently harassing them then they would have protection if they need it. Another possible way according to this quote would be to help people find a job who really need one. If people get jobs that they are happy with and jobs that they can deal with then there would less likely be kidnappings in Oakland this would be because they are getting money in a job they can adjust to.

Lastly, in an interveiw with David Roberto he states “ Kidnapping is a horrible thing and I feel it’ll be hard for people to stop” (Roberto) This is saying that he doesn’t think that people will stop because some people aren’t able to change. He thinks that because he was scared for his life since his sister almost got kidnapped. So many people say that there isn’t and will never be a way that people will stop kidnapping because people can never change their actions and it is impossible for people who kidnap to stop kidnapping, but other people may say if parents keep their children or child close to them then kidnapping won’t be a problem. In conclusion boys and girls both get kidnapped and their is a possible way that children can stop being kidnapped and taken away from their homes and family.

Uzochukwu, Okwagbala. “Kidnapping: Overview, Causes, Effects, and Solutions.” Owlcation, 1 Nov. 2019, owlcation.com/social-sciences/Kidnapping-Overview-Causes-Effects-and-Solutions.This article shows why people decide to kidnap and how is is a global problem. It also shows examples of the causes and effects. This passes the credible test because it is recent. If you go to the article then you can see under the author’s name clearly states that it was updated a month ago on november 1st. This means that most of their research is relevant to our present.